So we are in Notting Hill. It is such a charming part of London isn’t it? We stroll through before finding the very place that will have our attention for the next few hours: The Ledbury, a very understated restaurant which is ranked quite highly by dining guides across the world… 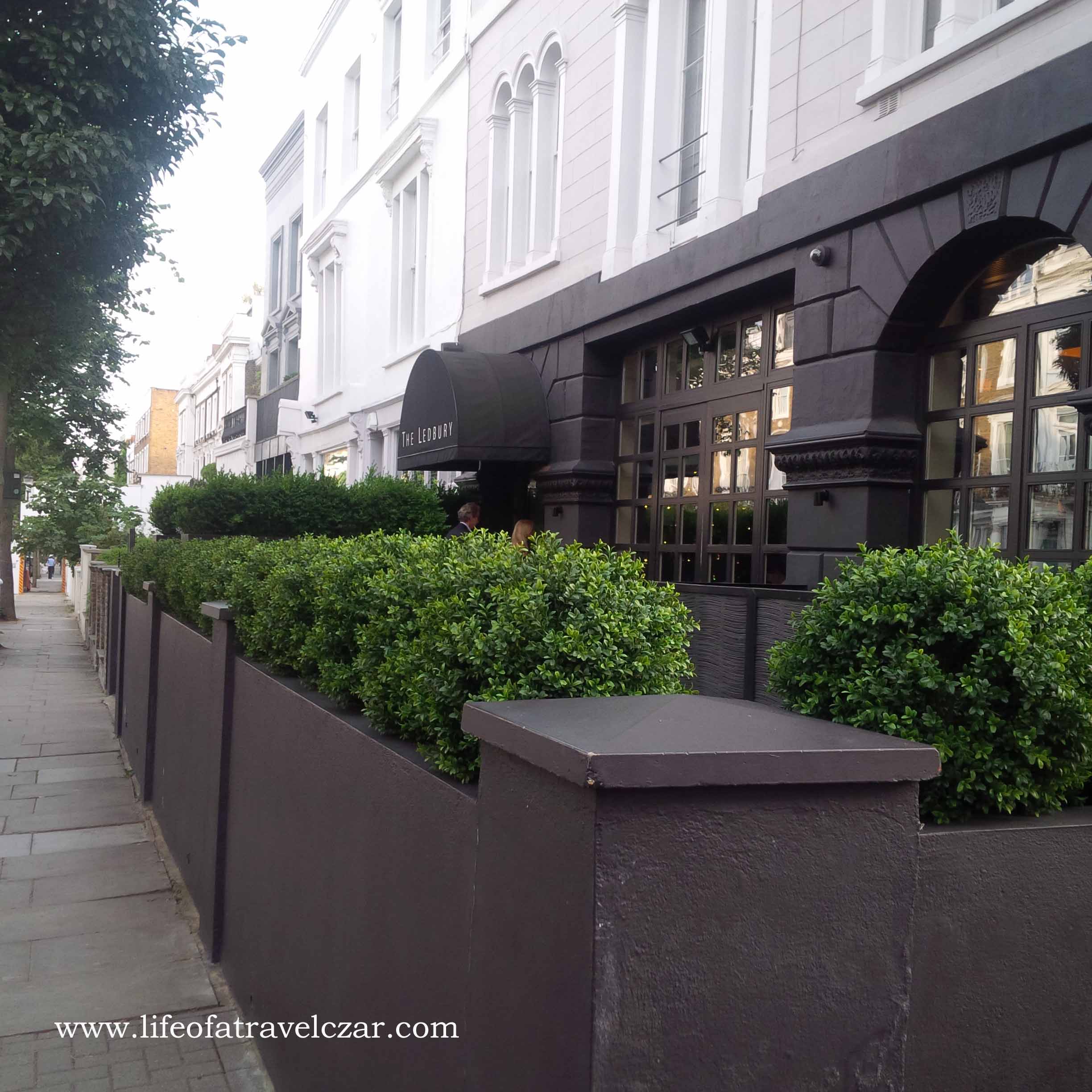 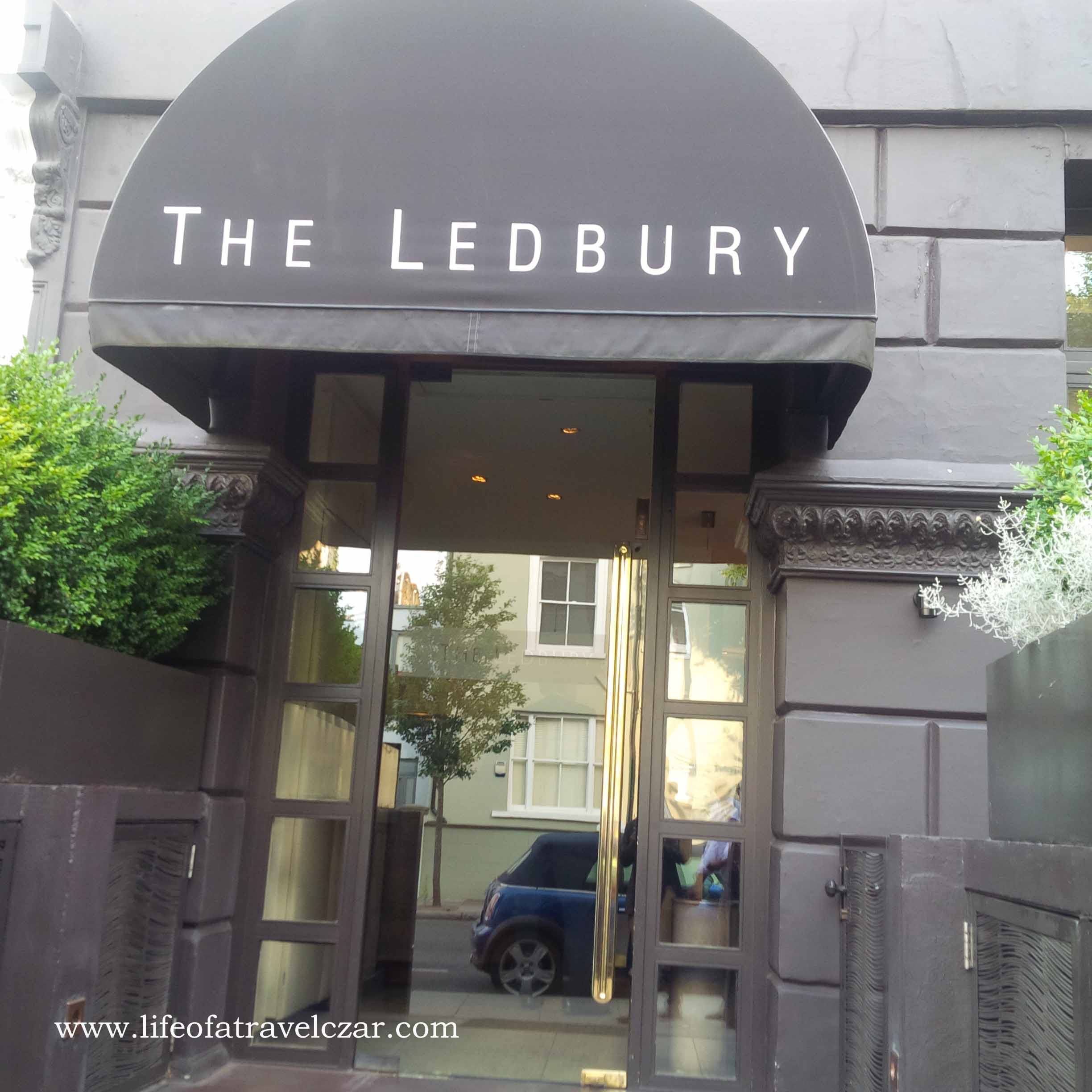 I won’t go through all of these but I will note there were a mixture of interesting flavours from seafood to cheese and wonderful texture contrasts from cold and soft to crunchy. As an aside, the shrimp cracker below, was my favourite!!! 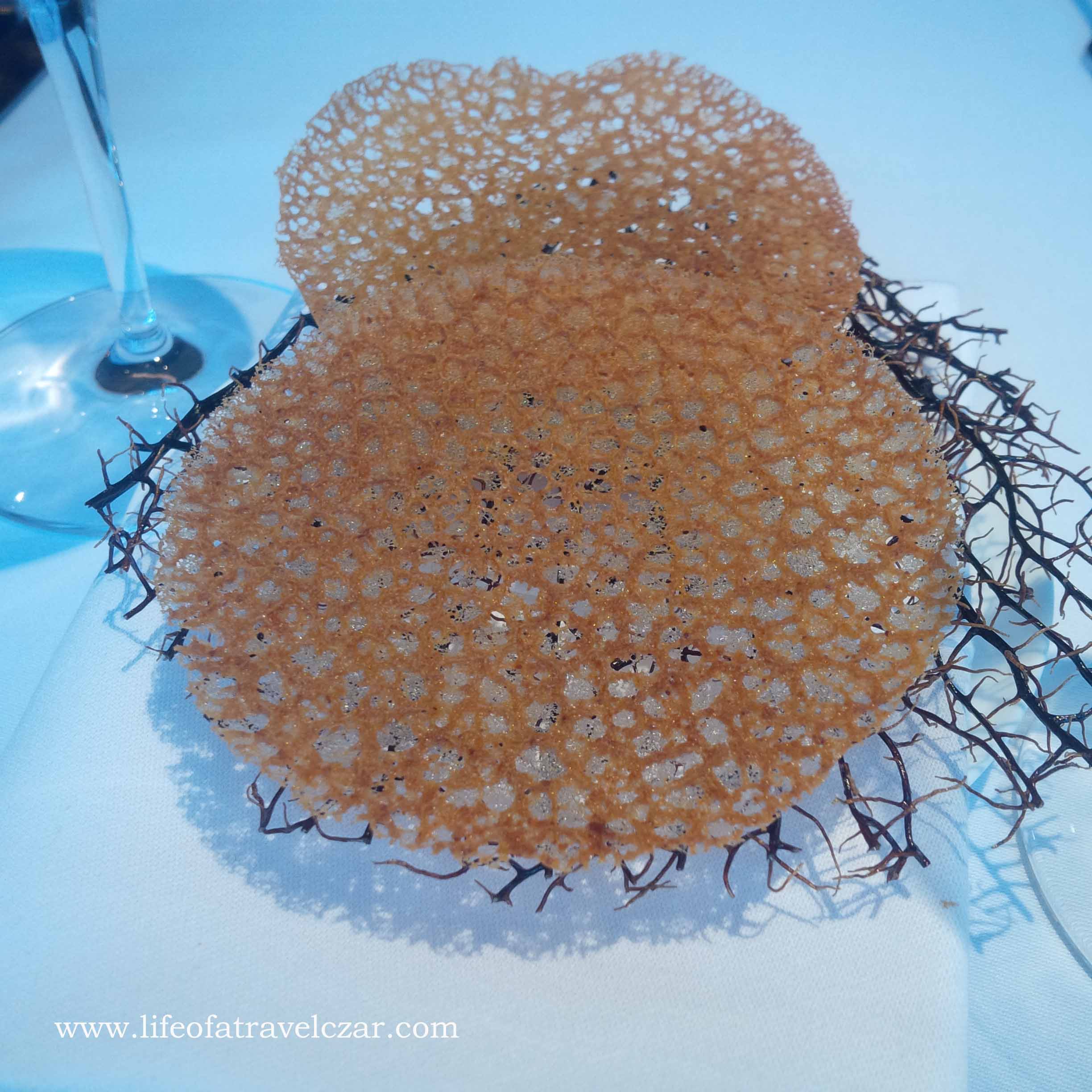 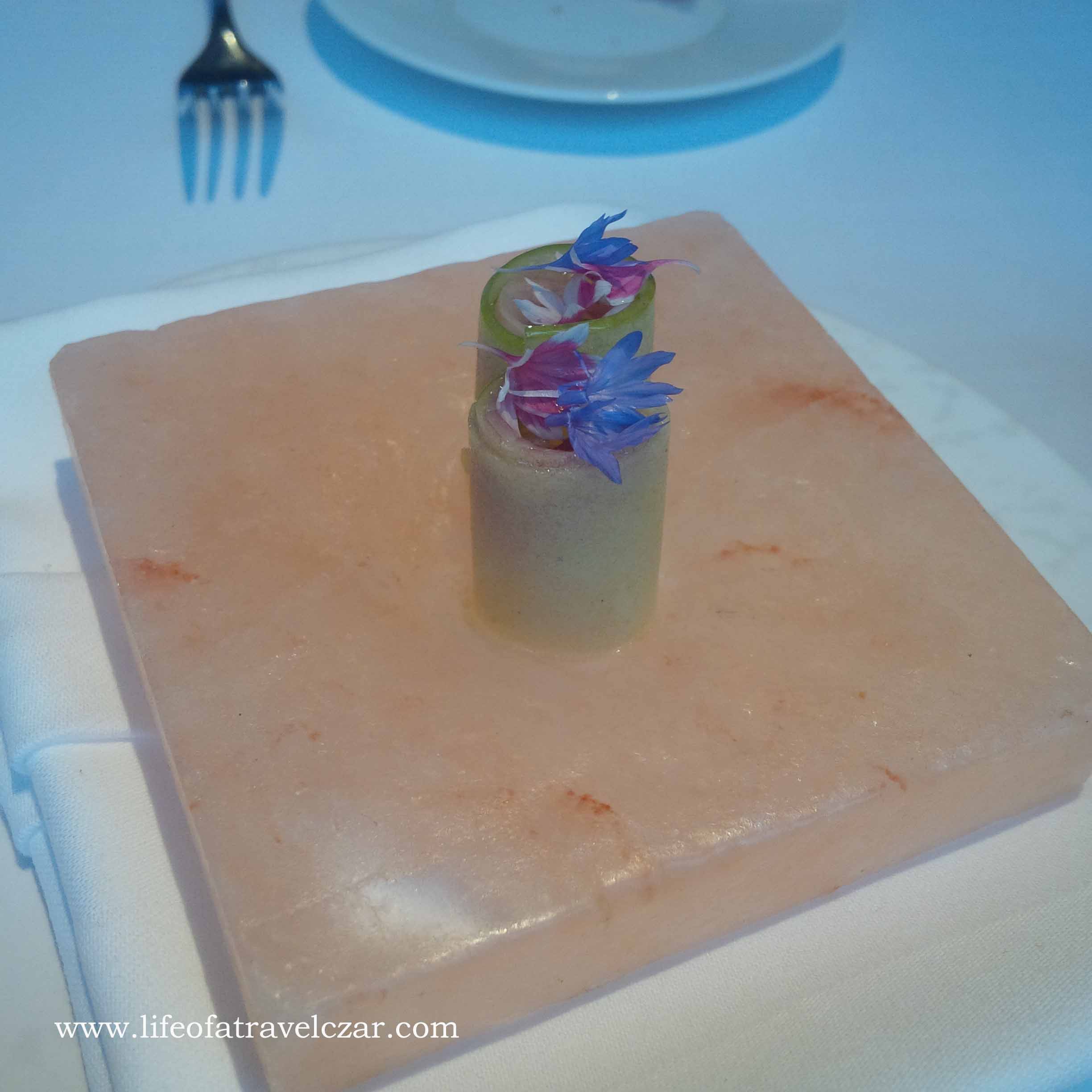 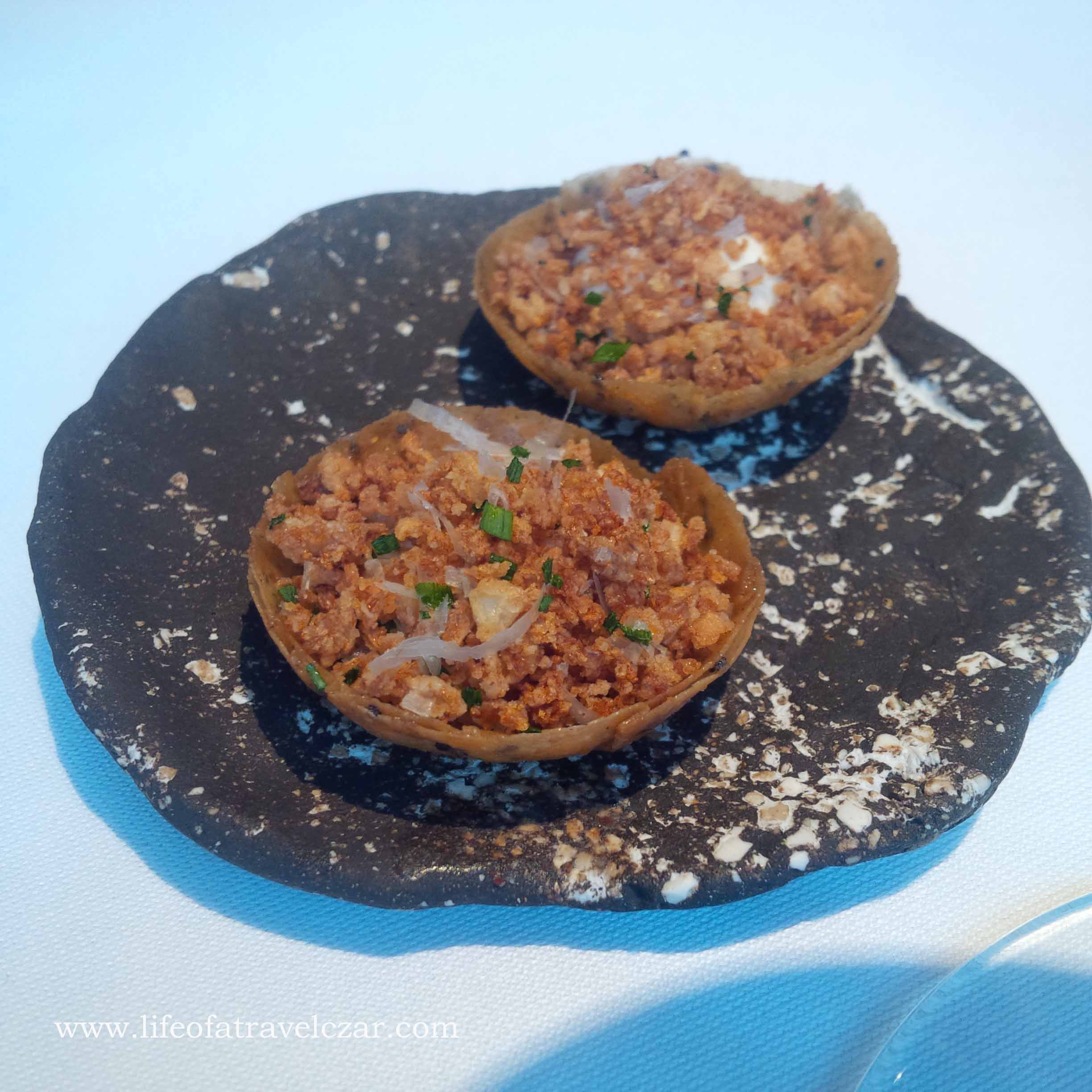 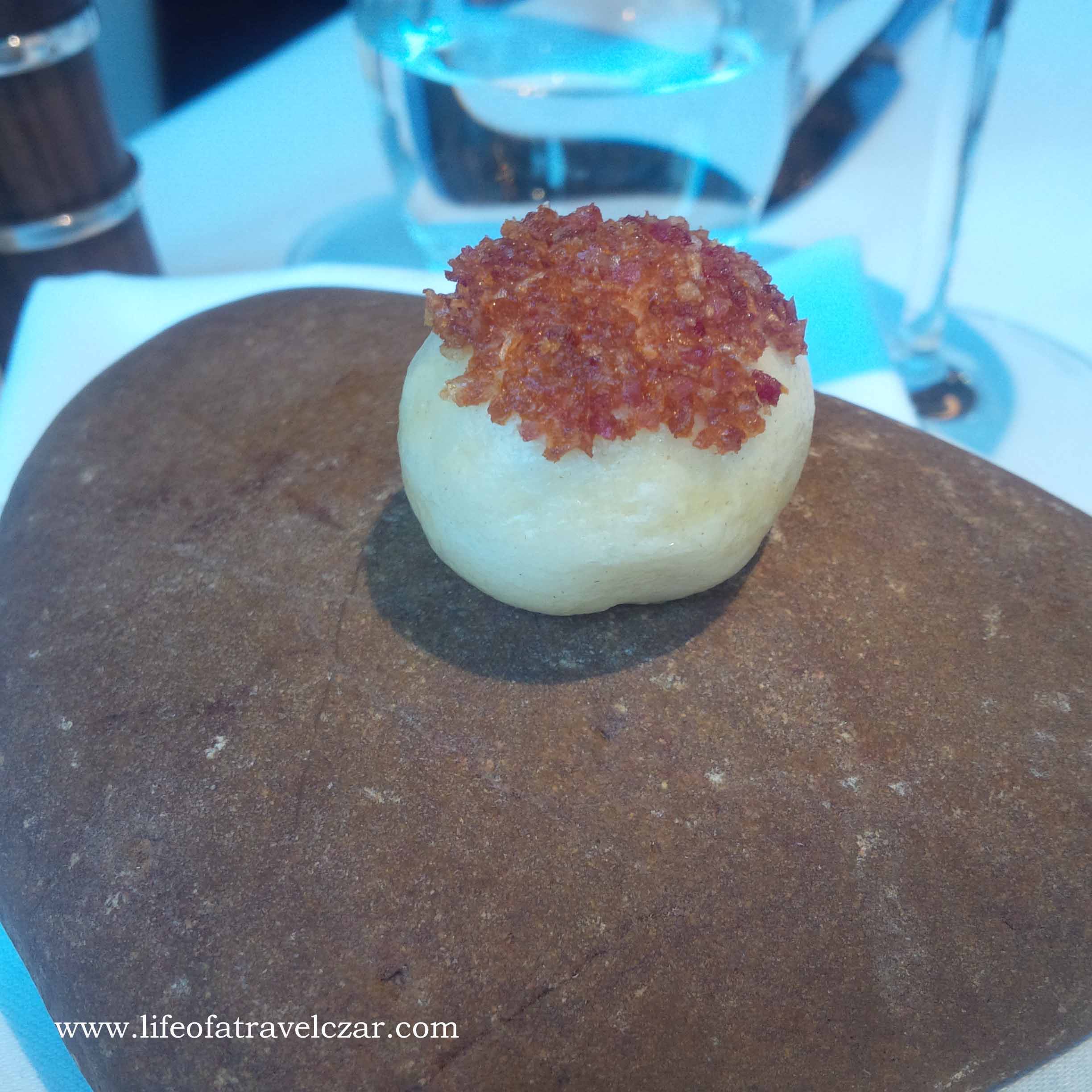 The bread was fresh of the oven, warm to touch and served with a very light creamy butter. Normally I avoid the bread, but I made this occasion an exception. 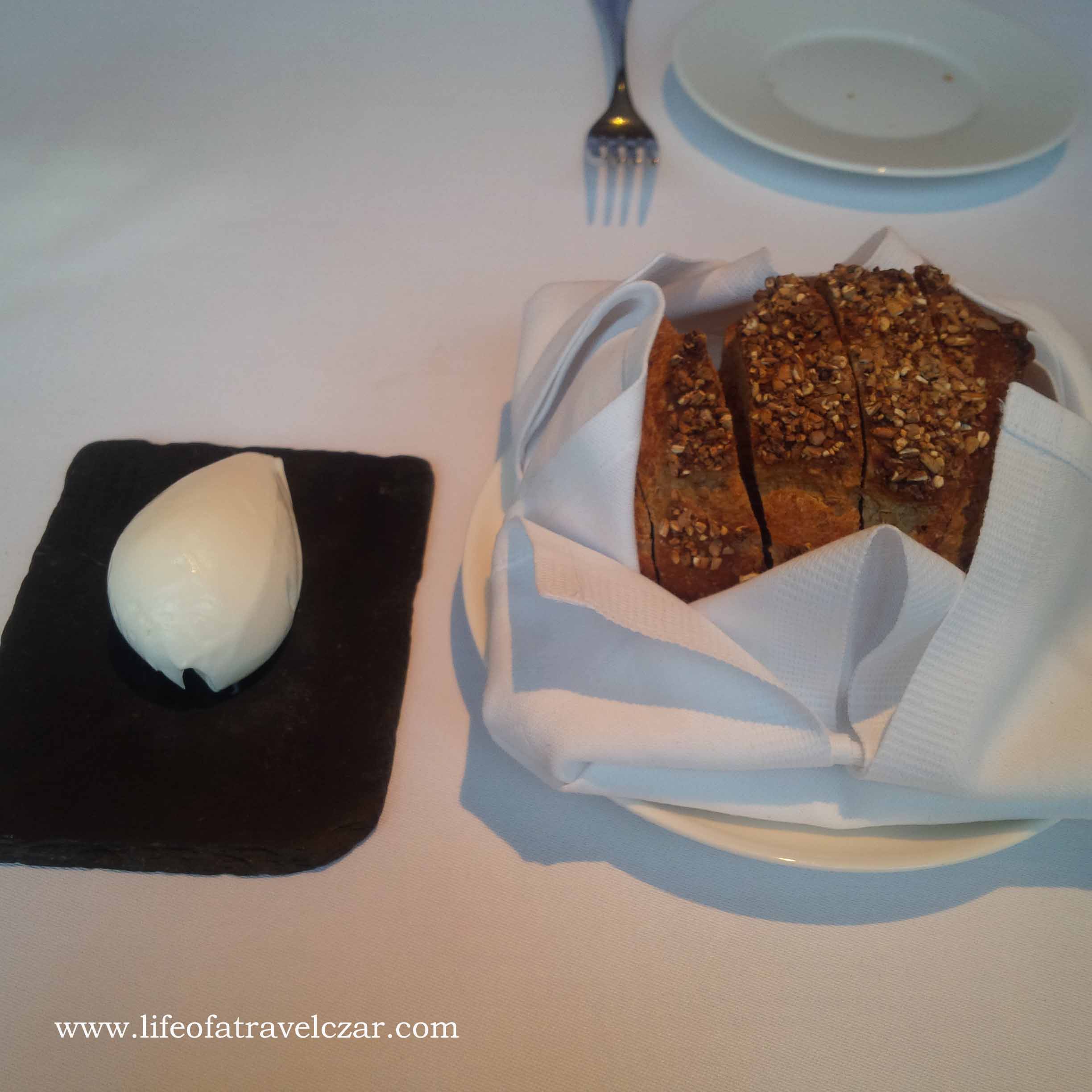 To start the evening, I choose a half bottle of the Chianti Classico, Le Corti (2011) from Tuscany for myself. This Chianti is produced from the vineyards owned by one of Tuscany’s noble families, the Corsini family, who have owned the vineyard since 1427 (their illustrious lineage includes a Pope and a Saint and they also helped build the Trevi Fountain in Rome). The vineyard soils are rich in river stones and this wine is made mostly from Sangiovese, with only five percent of Canaiolo and Colorino. The wine has this beautiful dusty earthy aroma with a powerful smokiness on first taste which follows through with ripe sweet and spicy cherry fruit flavours with fresh acidity to round out the experience. This wine is definitely a keeper!

My dining companion opts for the Hamilton Russell Chardonnay (2013) from Hemel-en-Aarde Valley in South Africa. I have a glass of this as well later to pair with the seafood dishes. The wine has pear and lime aromas which follow on with the same flavours on the palate. The flavours are enhanced by the acidity and dry minerality which flows through into a long finish. 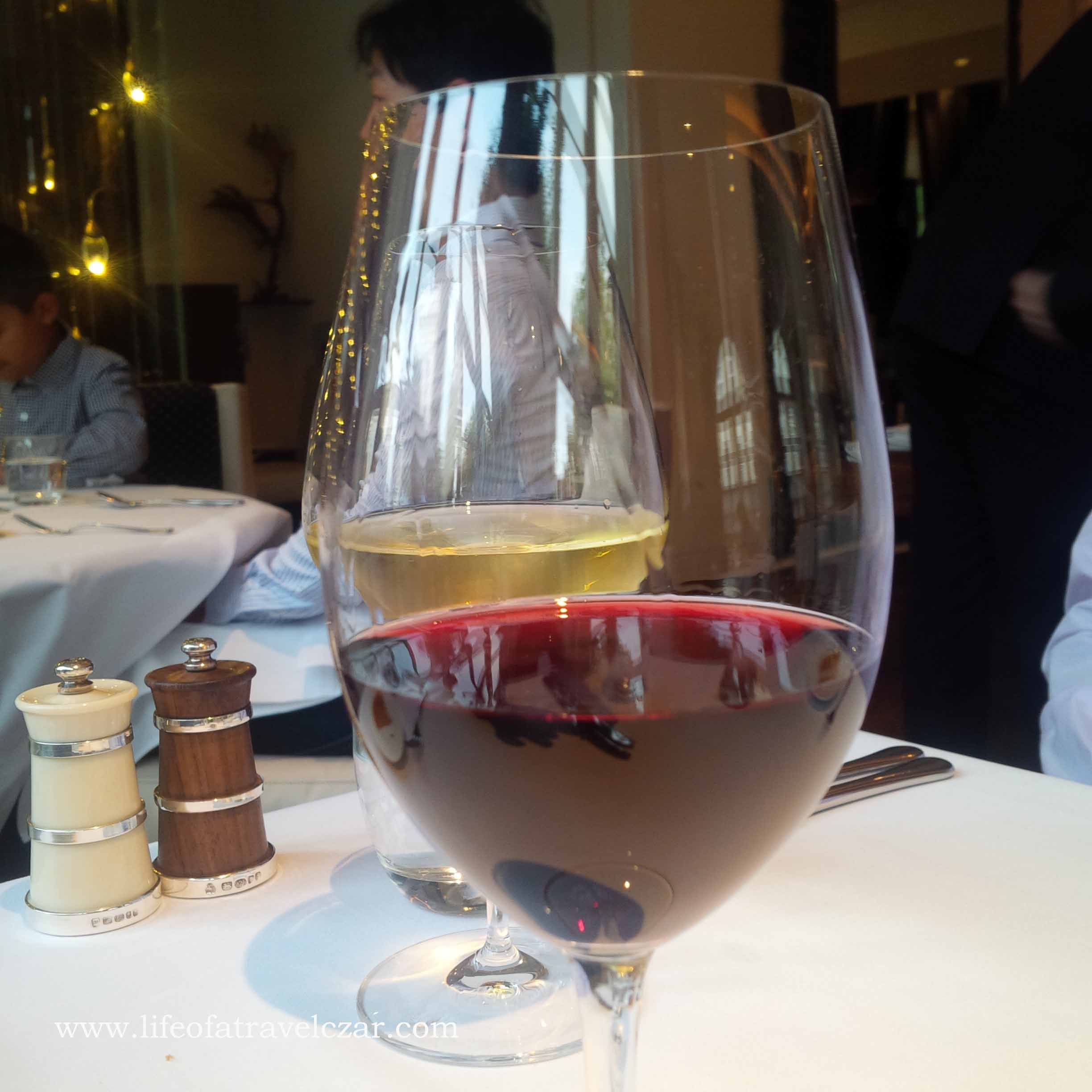 We both opt for the scallop for the First Course. For the First and Second Course I switch to the Chardonnay. 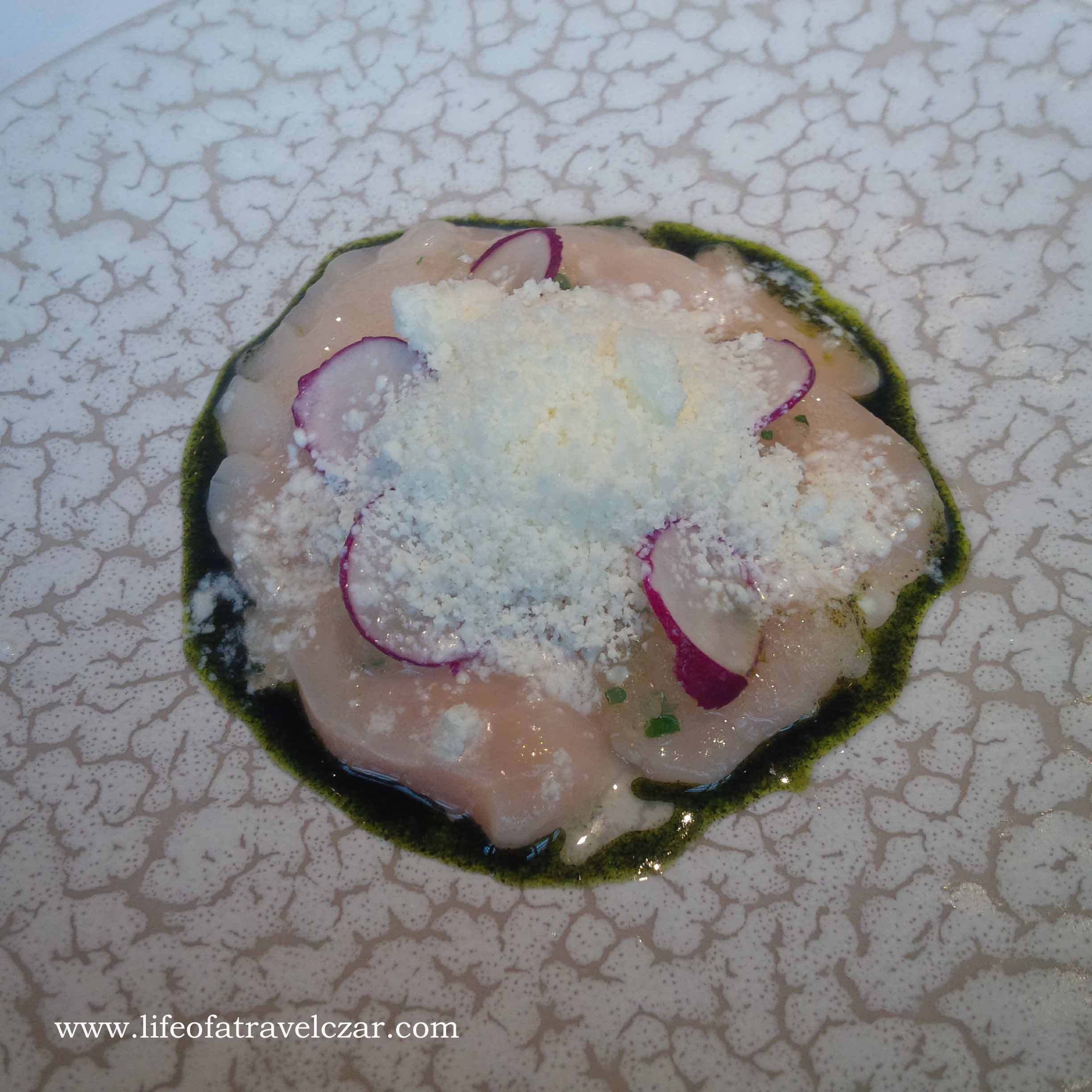 The seaweed oil is light with a hint of the distinct salty seaweed taste, while the succulent scallops retain their distinct flavour with a beautiful fresh taste which stands on its own. The light coldness and icy sensation of the frozen horseradish and the crunch of the kohlrabi just adds a lovely contrast of textures to this dish. There is light (but amazingly understated) bite in the horseradish which rounds out this dish. A simple dish with quality produce which just captures the imagination.

For the Second Course I have the Langoustine. 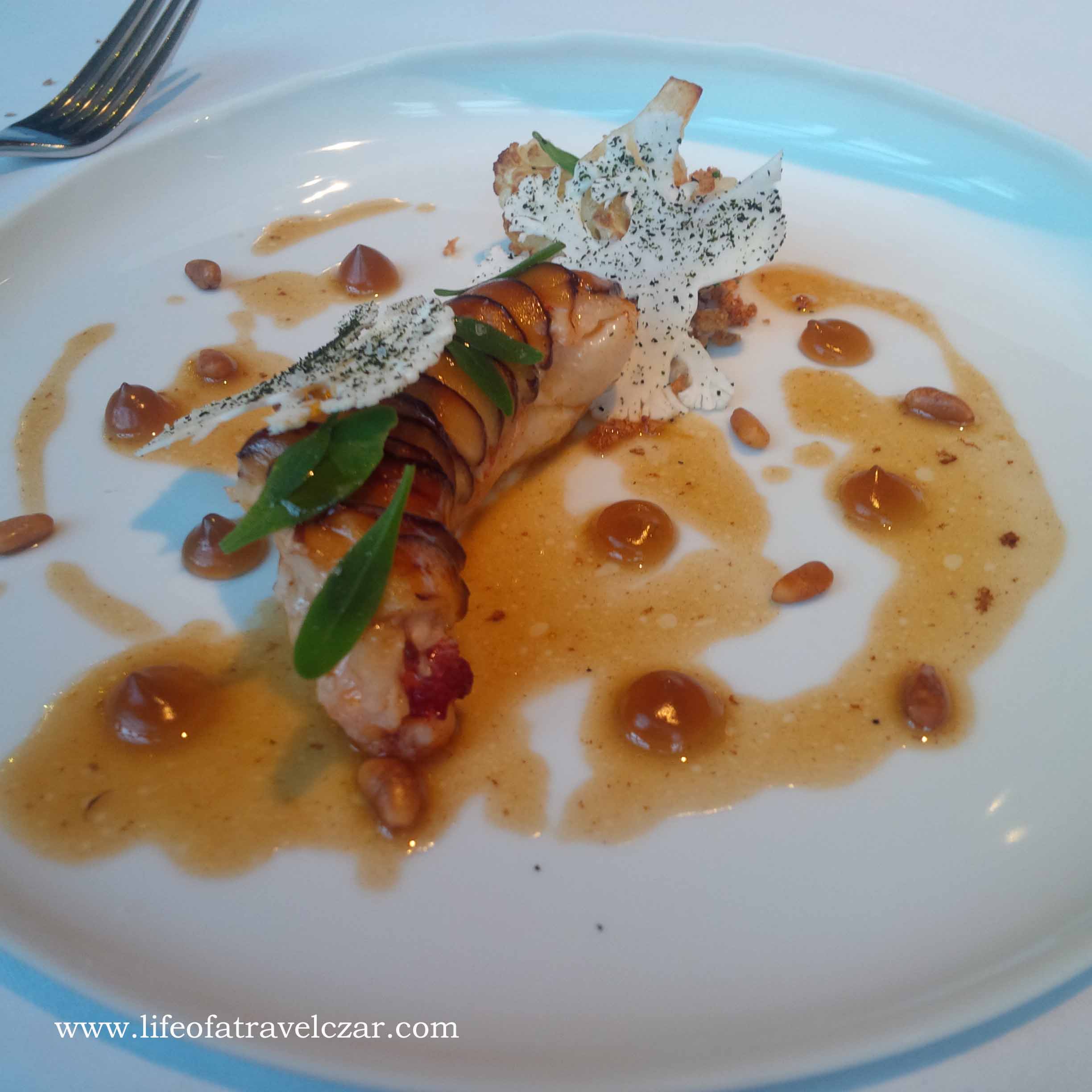 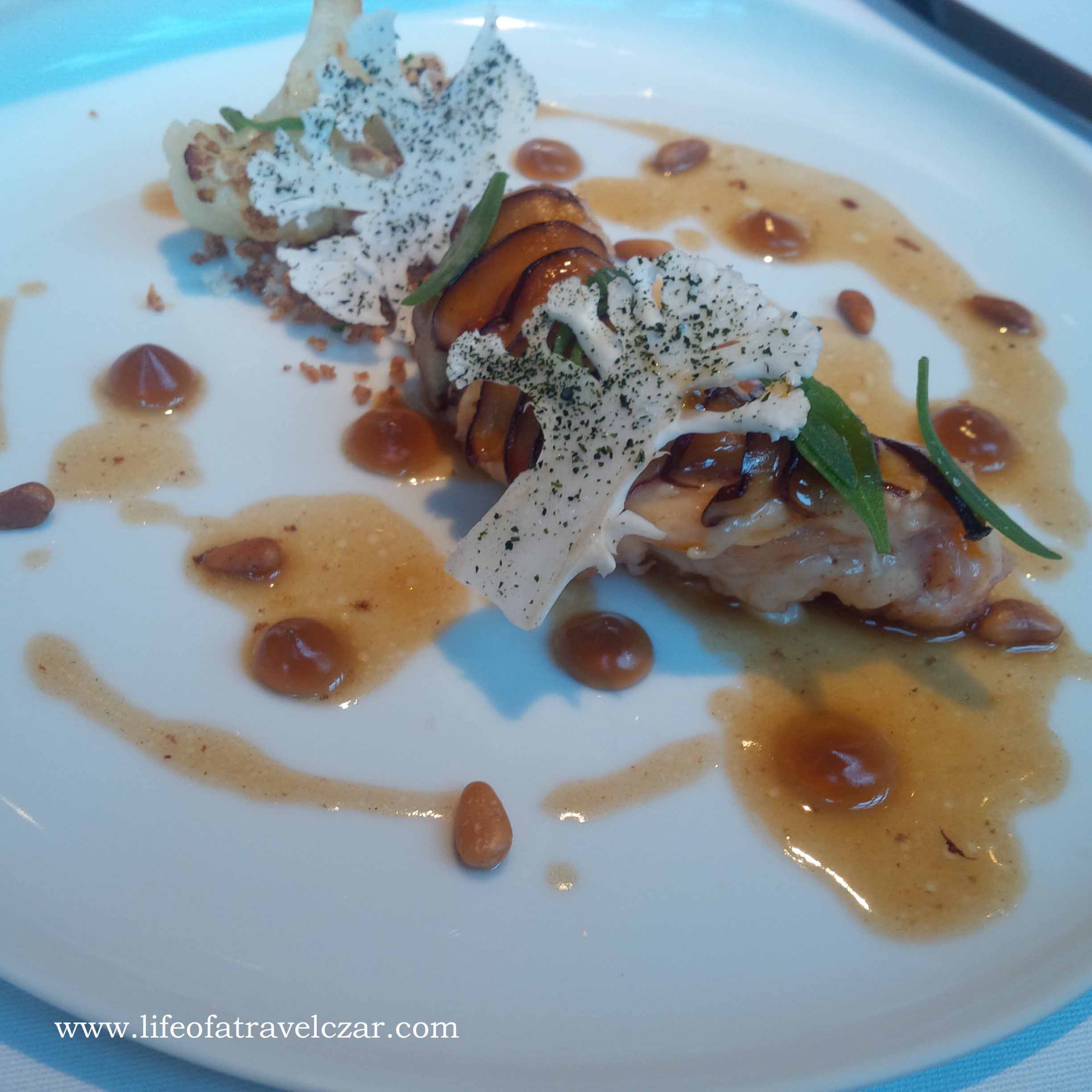 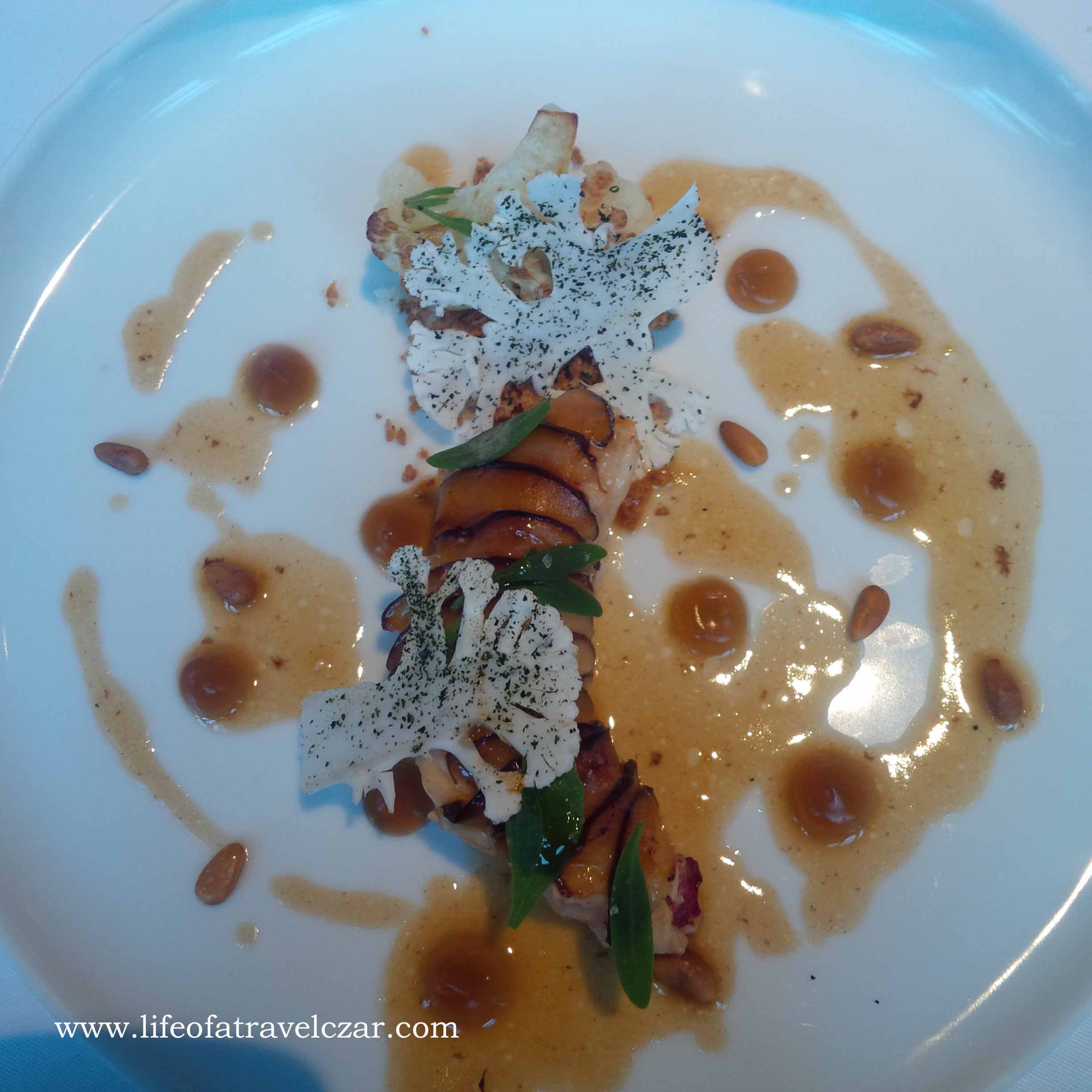 This dish is so aesthetically pleasing, hence for the many pictures… The browned pine nuts have a smooth crunchy texture, the cauliflower is firm and crunchy and the shiitake mushroom is soft with slight firmness in its skin which is then balanced against the succulent langoustine. The defining point of this dish (which absolutely would rank as one of my favourite of all time) is the sweetness and freshness of the langoustine. It stands out in the dish and provides the perfect pairing to the the saltiness and earthiness of the shiitake mushroom. There is also light sweetness to the sauce to balance the salt content to provide for a well rounded dish.

My dining companion chooses a game poultry (I can’t remember which, but I recall it to be the guinea fowl with truffles). Given its the last night of the holiday, we have plenty to chat about, that I actually forgot ask about any of the dishes I didn’t try. 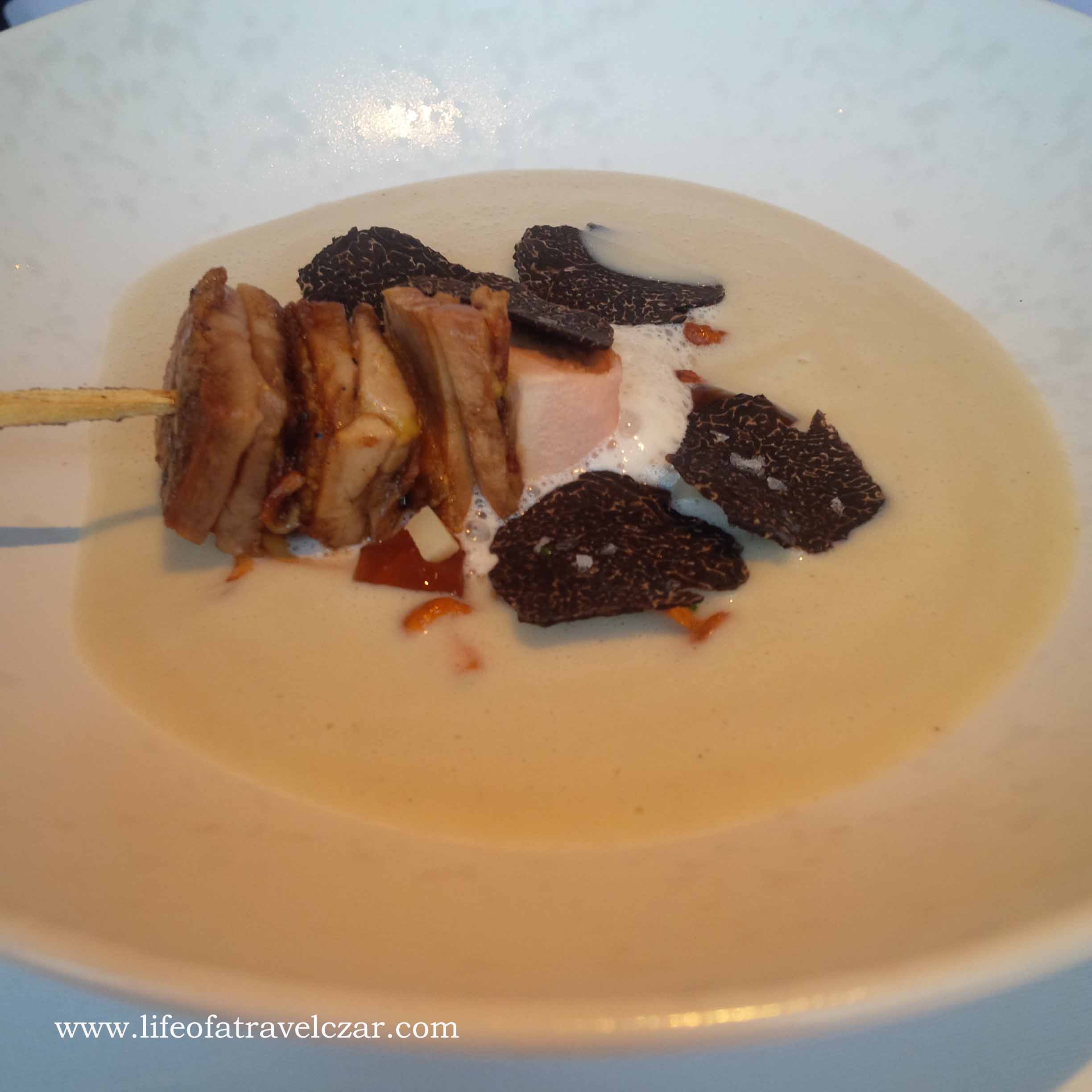 For the Third Course I go for the lamb.

As I switch back to the Chianti, I realise I have run out! Not happy. I look to my dining companion to suggest going for another half bottle, but the suggestion is not agreed to. So I peruse the menu in search of alternative by the glass. Then the waiter, which notices my reluctant ordering of another glass, notifies me that they doing the Chianti Classico Villa le Corti by the glass today and he obliges me for another glass. 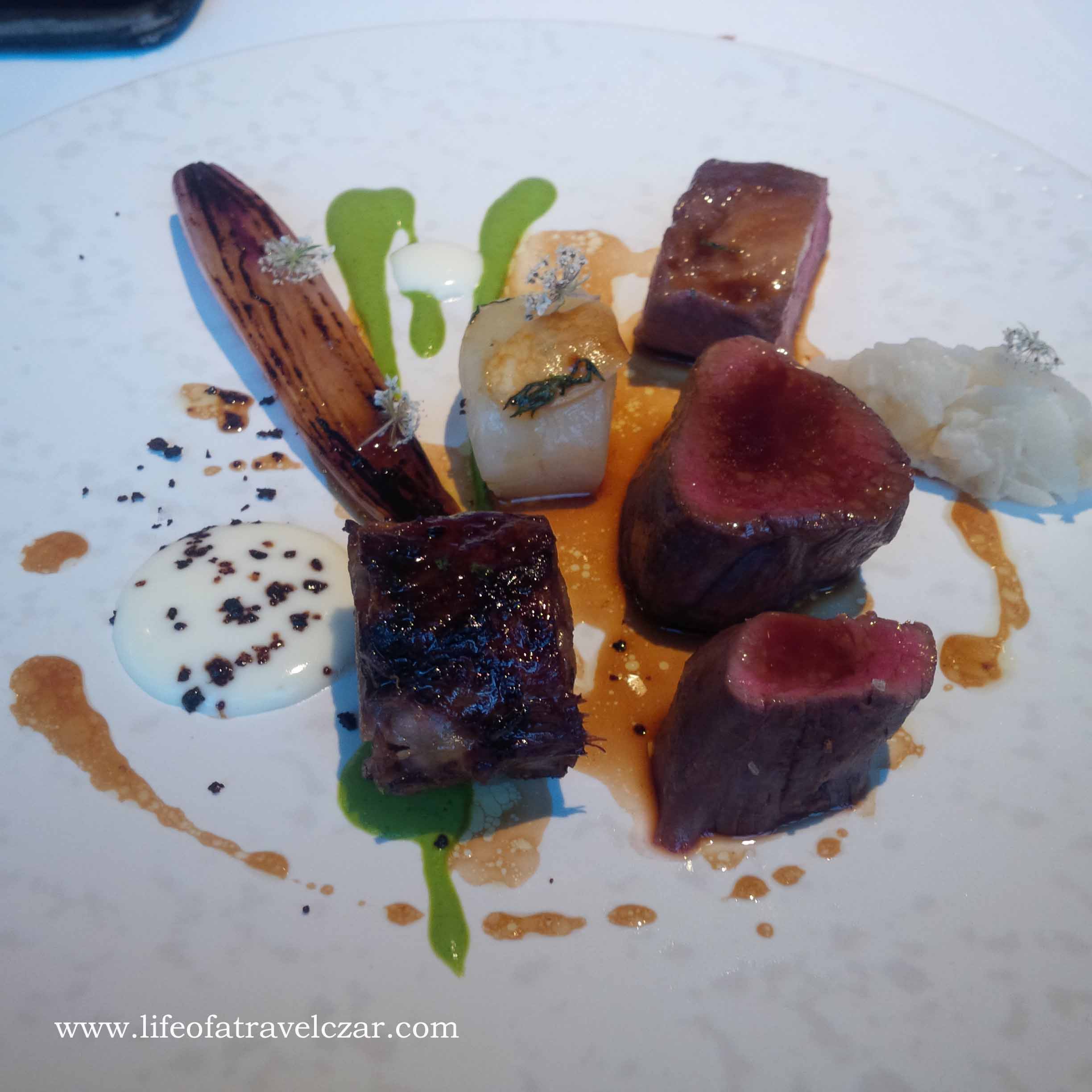 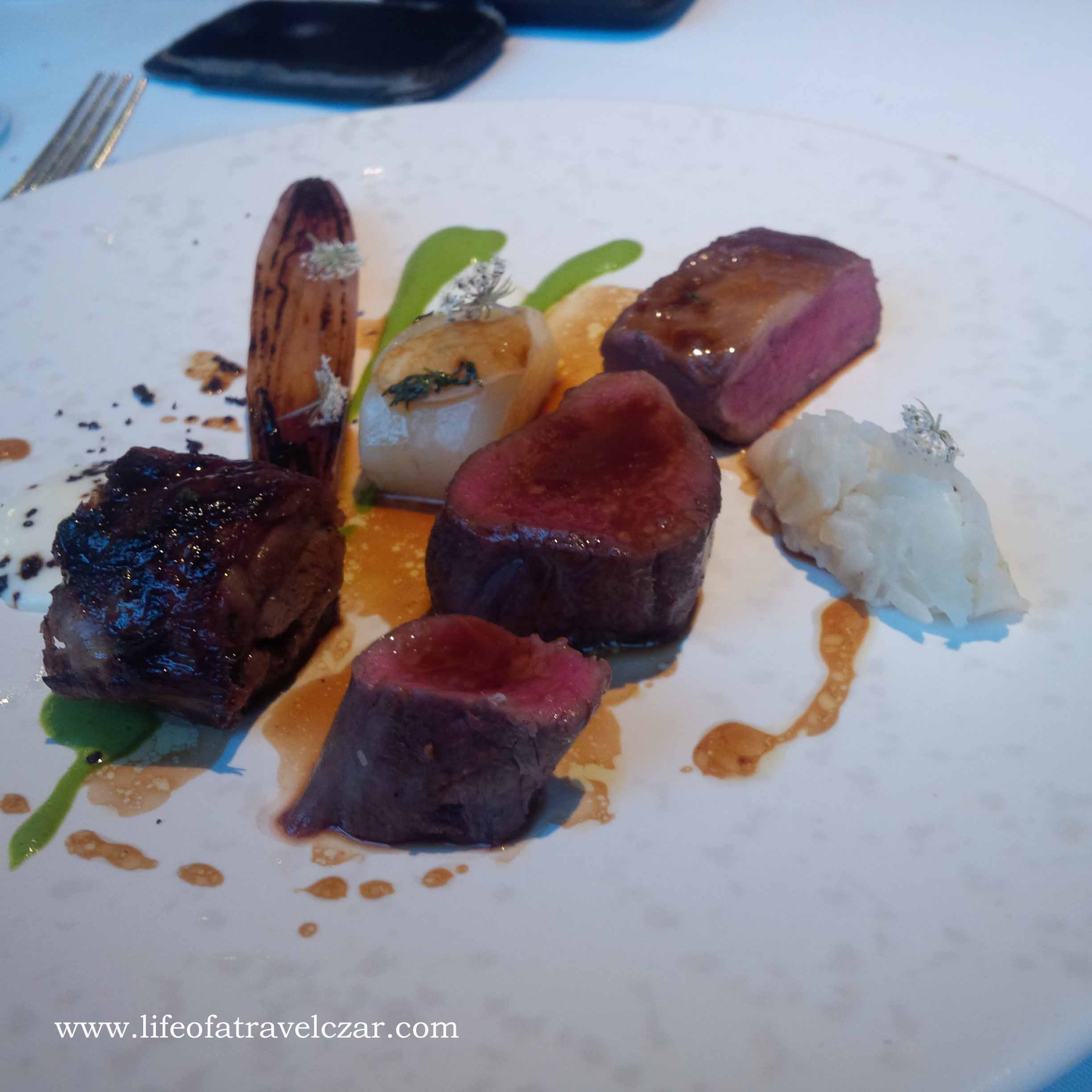 The lamb is just beautiful. The fillets are succulent, firm with the full juices of the lamb retained (along with the jus reduction on top) and it is simply an example of where quality produce can deliver an outstanding dish on its own. Then there is a more fattier part of the lamb, like a braised shoulder on the side (to the left) which is a contrast of textures and further showcases the flavour of the lamb with the release of the fattier juices and the taste of the caramelised skin.

The padron pepper sauce which doesn’t overpower the lamb, but adds a gentle spice and tang to the dish. The garlic shoots are just soft and caramelised and provide another set of flavours and textures. The soft cream sauce adds a little lightness to dish, while the turnips have a nice firmness to them to ‎round out the dish.

My dining companion has the Turbot – which looks simply divine. The dish is the definition of aesthetics.

Fillet of Turbot with Brassicas, chopped oysters and Sake 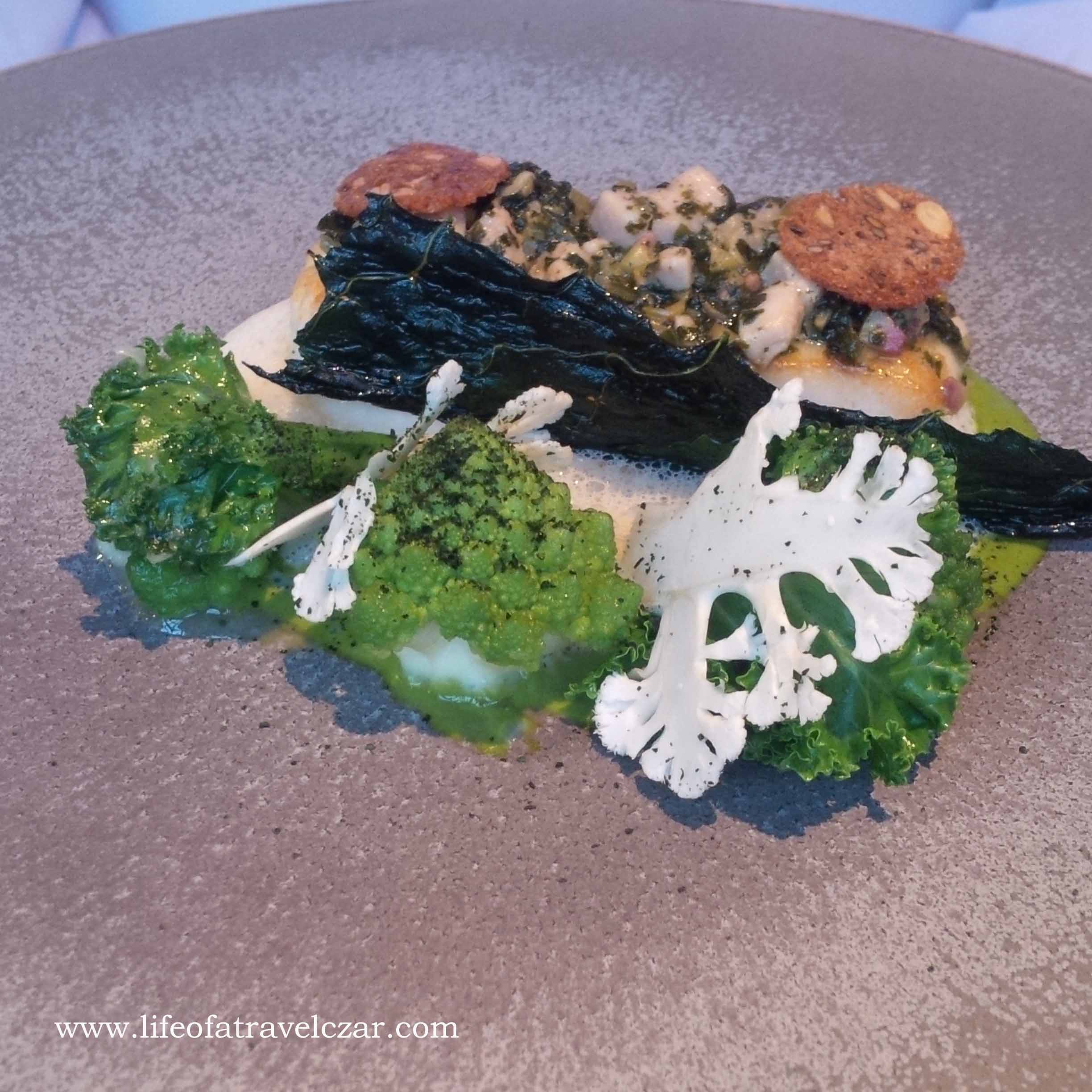 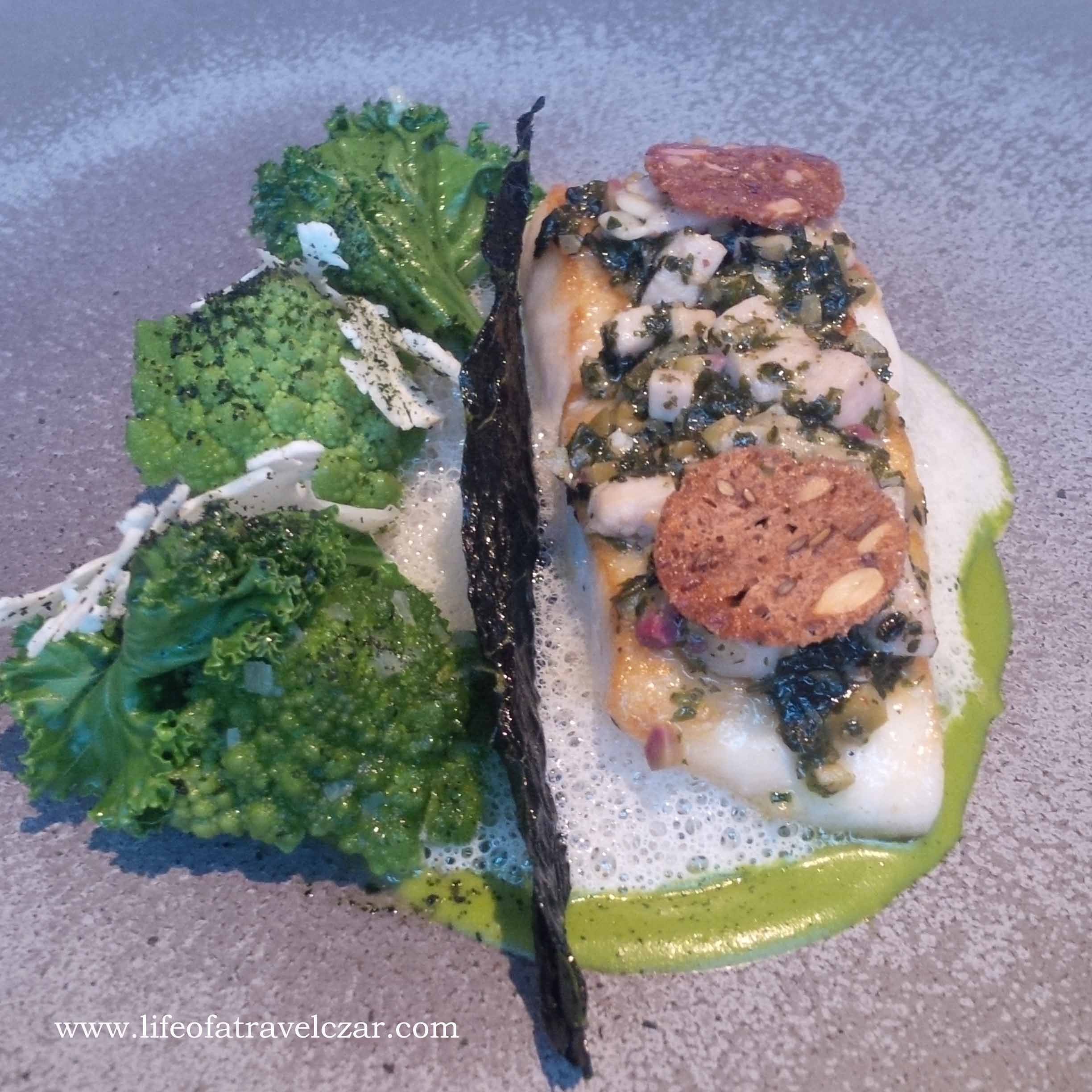 For the pre-dessert we have a Lychee and Custard. 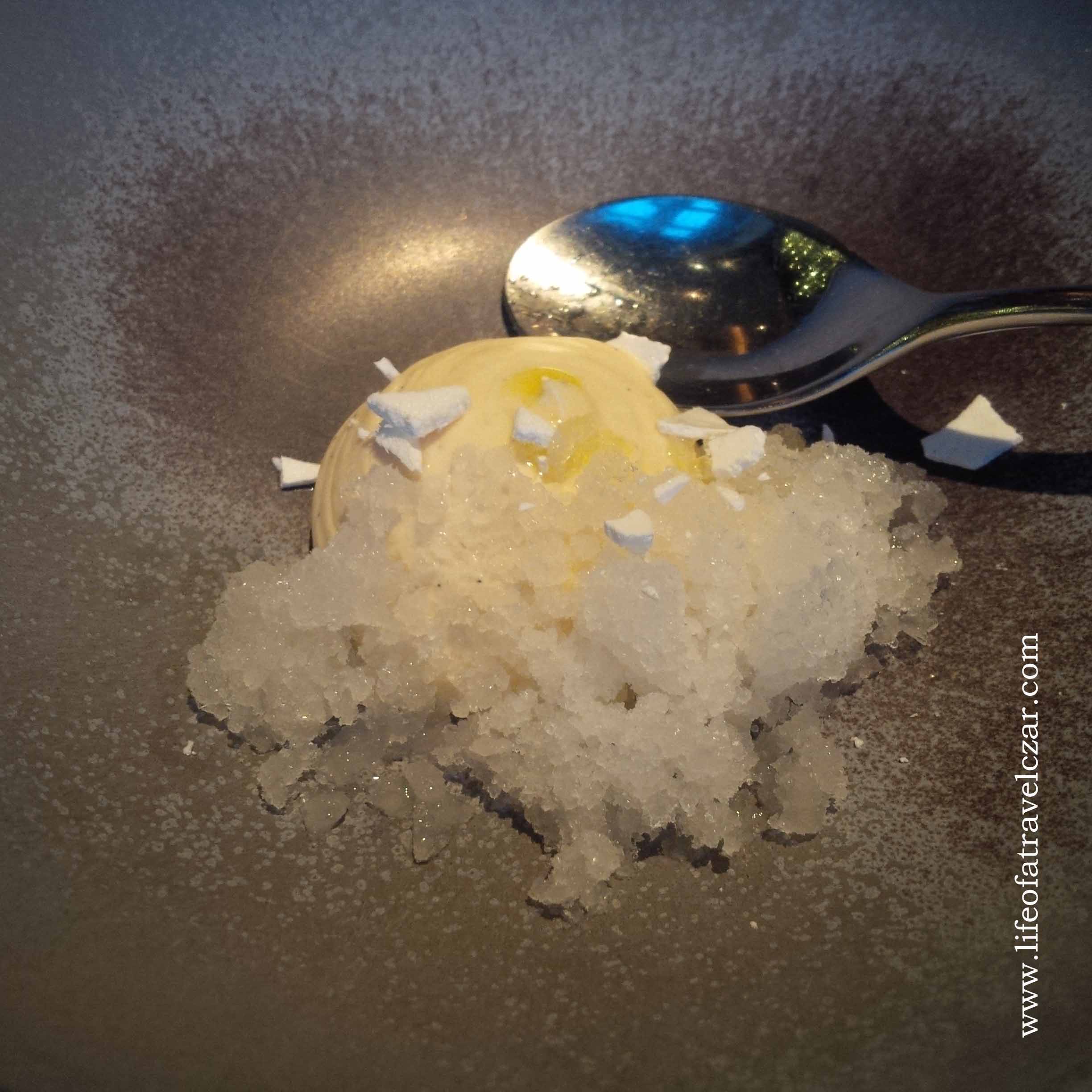 For the dessert, I opt for the Black Cherries – A Classic. 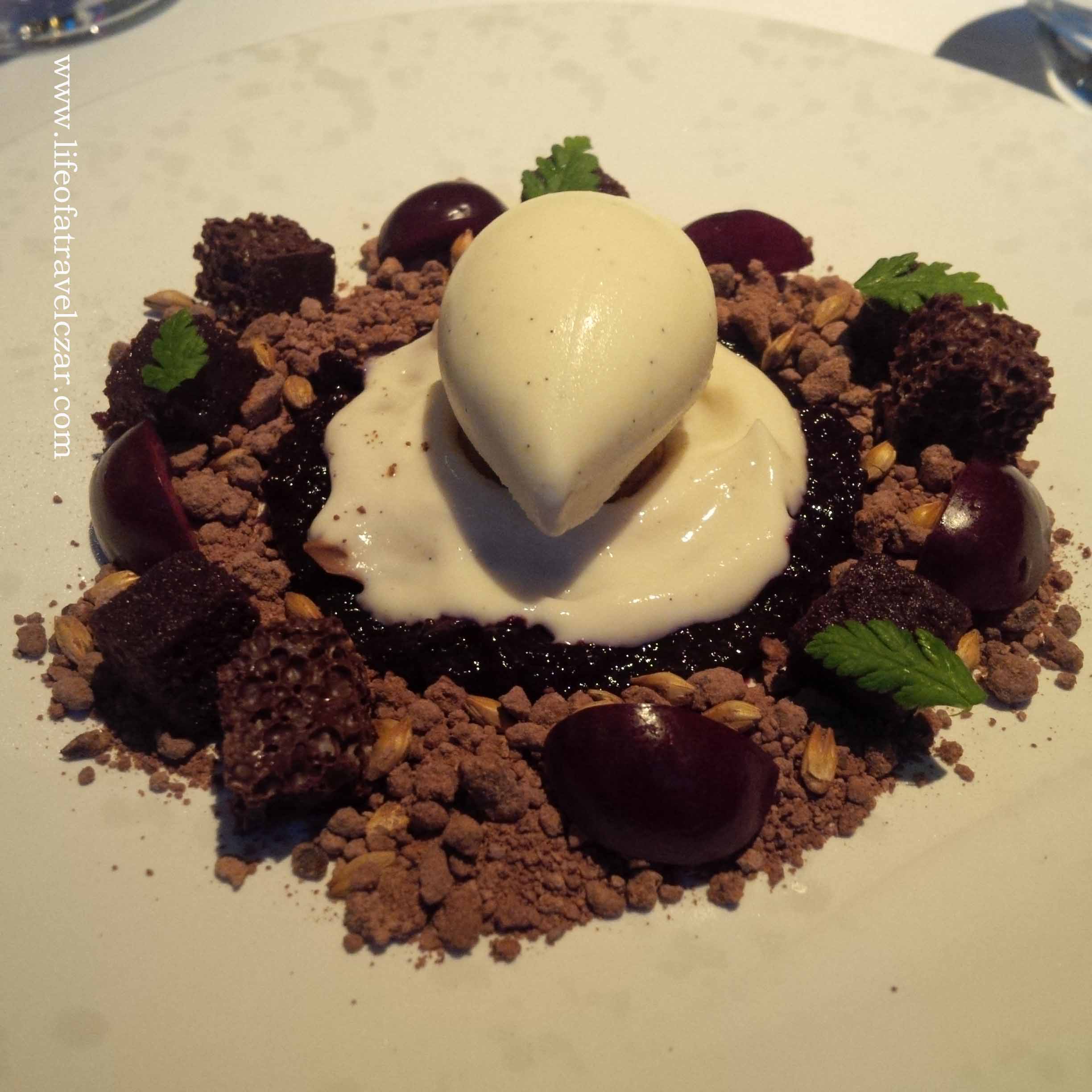 This dish is as deconstructed as it gets. It has some aerated chocolate pieces on the side, juicy black cherries, ice cream, gravel seed chocolate savoury base, brandy filled sponge cake, super sweet caramel under ‎a buttery salty shortbread which is at the base of the ice cream.

I will start with taste, the rich cocoa flavours of the chocolate stand out, while the liquor in the sponge is strong and cuts through the chocolate. The black cherries provide a full rich fruit flavour which combined with the chocolate gives that “black forrest cake” taste sensation that one always loves. The addition of the caramel and the shortbread adds a lovely buttery overlay to the dish. It is sweet but very balanced.

The texture contrast in this dish is amazing; aerated chocolate (think Aero bar), juiciness of the cherries, the gravelly base, sweet caramel taste and the crumby biscuity texture of the shortbread. The interaction is like a circus in my mouth.

I can’t recall what my dining companion opted for, however my notes and the picture indicate it was the rapeseed oil cake…. 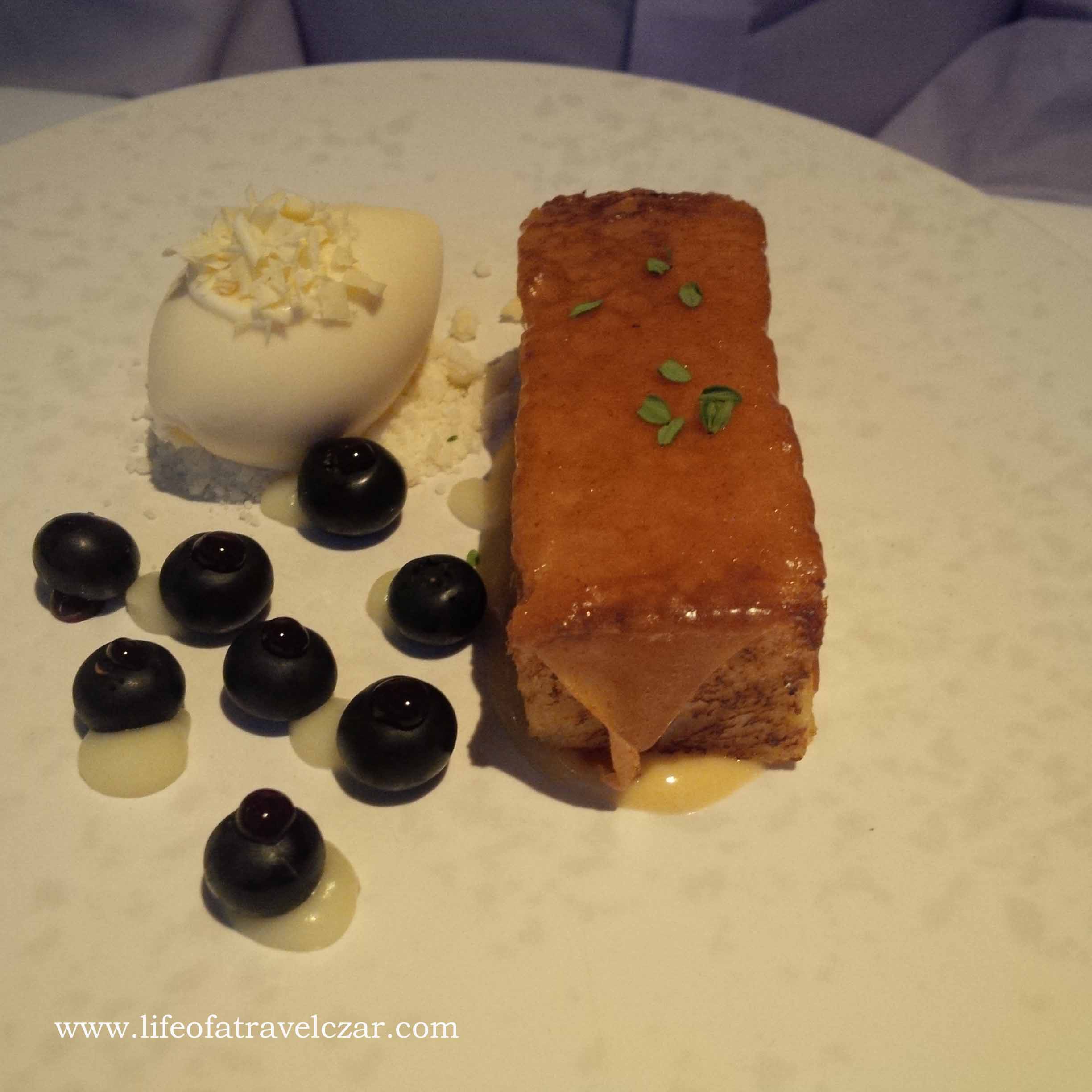 We have some lovely petit fours. When go to order coffee, I note to the waiter my usual dislike for London coffee, he asks me what I actually want and we both say a flat white (they do it in Australia not in London), he says he is familiar with the Australian’s love of flat whites and has one made for us…. Such Service! 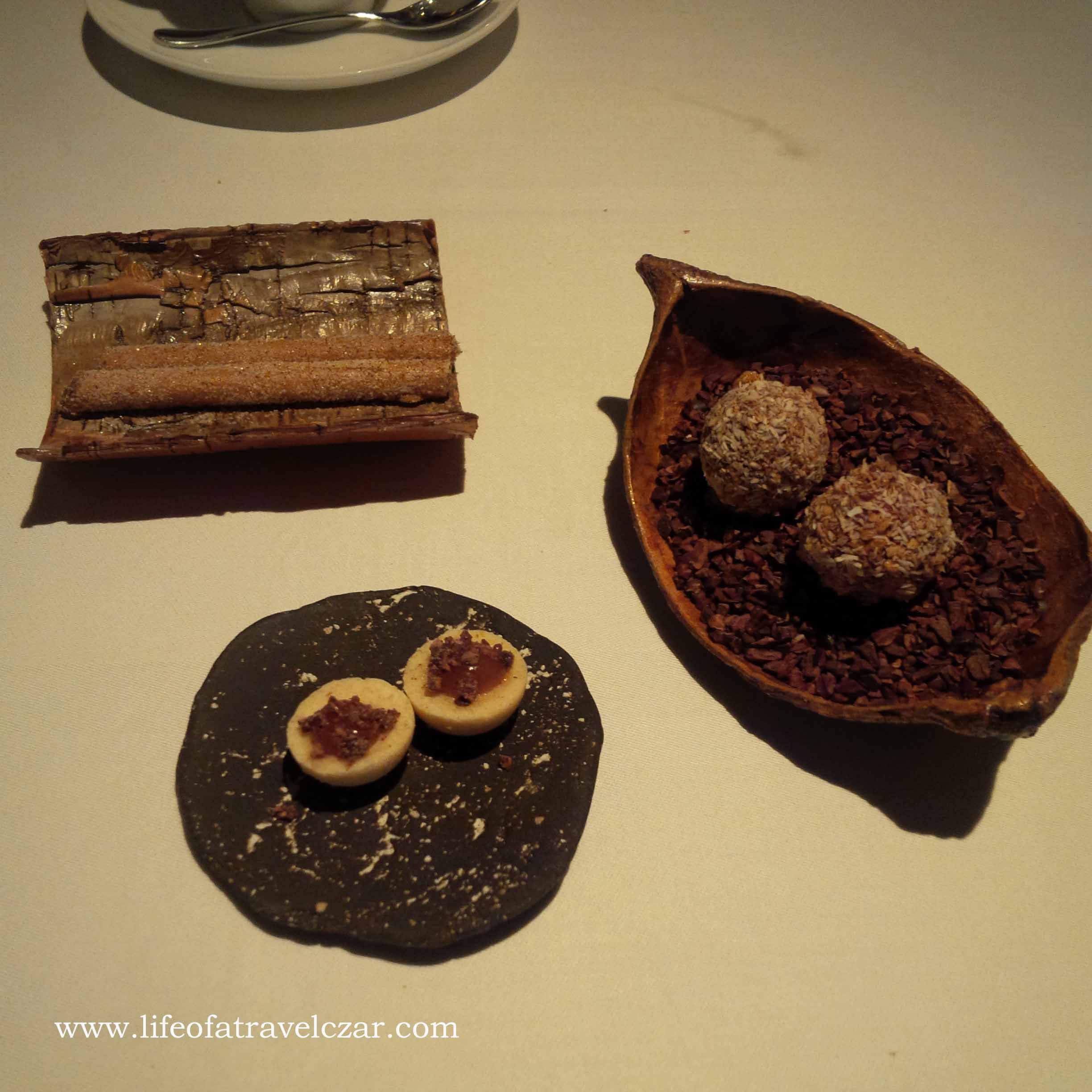 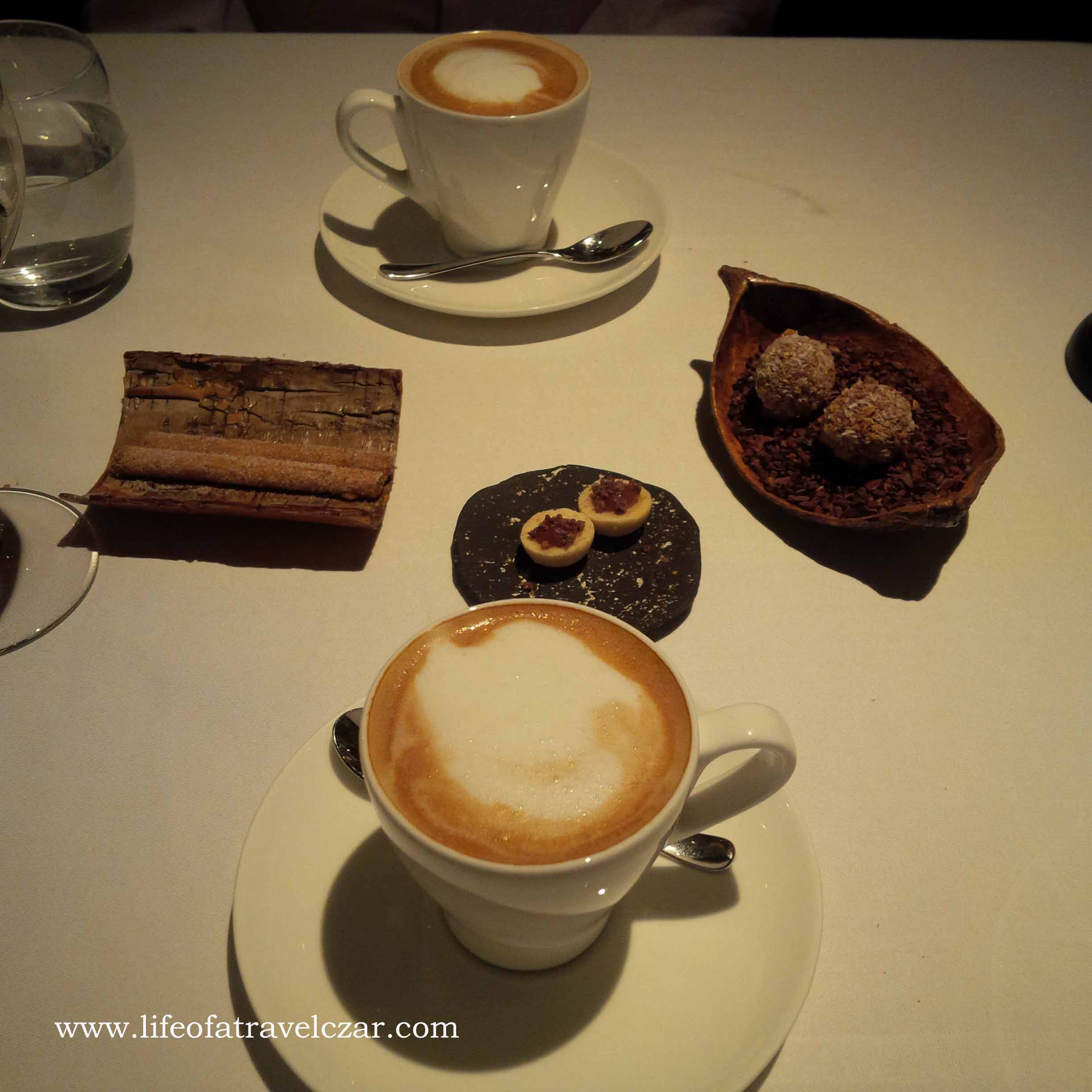 So we finish our meal and our waiter organised a taxi for us back the hotel.

I would surmise as follows…well presented, thoughtful cuisine with solid culinary skills and execution. A wonderful wine list and fantastic service. The understated nature of this place has a beautiful charm to it and it is place of under promise and over deliver. I would argue that this is the best restaurant in London. I hope to make this a fixture of my future stays in London.