There are few places of refuge from the modern world that offer charm, history and the right style of ambience to disengage one from the worries of society than the Hemingway Bar at the Ritz in Paris. The bar has been closed for four years while the Ritz underwent extensive renovations, but it’s almost as if nothing has changed when I walked in again. The original fixtures have been maintained to connect its legacy with the future of a more modern hotel. The bar is named after regular patron, Ernest Hemingway, who, according to legend, famously “liberated” the bar from the Nazis in 1944 and downed over 50 martinis in one sitting. Mr Hemingway practically lived at the bar and hence it was appropriate to name it after him.

The Hemingway Bar requests that you refrain from taking photos (which I did kinda ignore with respect to my own cocktails) to protect the privacy of its guests. So I avoided taking snaps of the bar area, so here are a couple of snaps sourced from the Ritz Paris which will give you a good feel for what the bar is like. 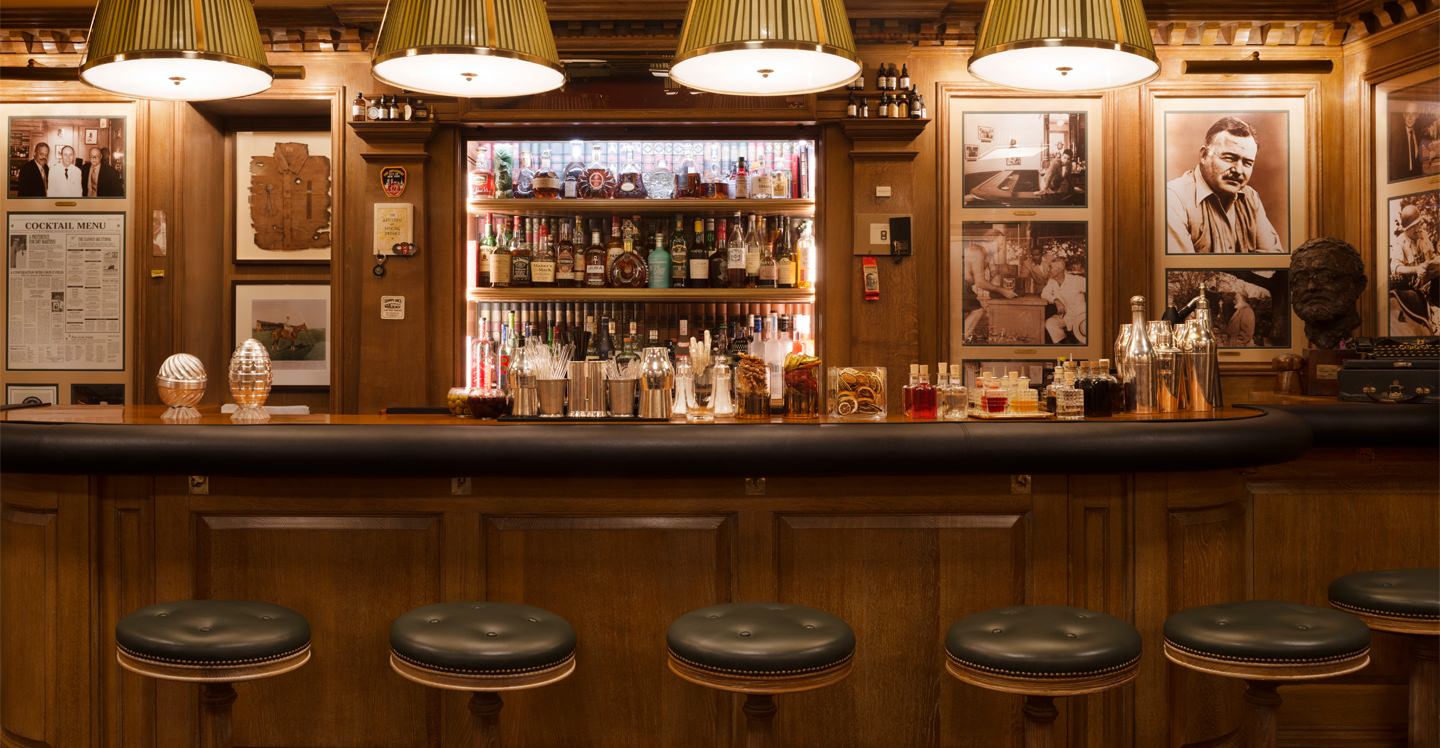 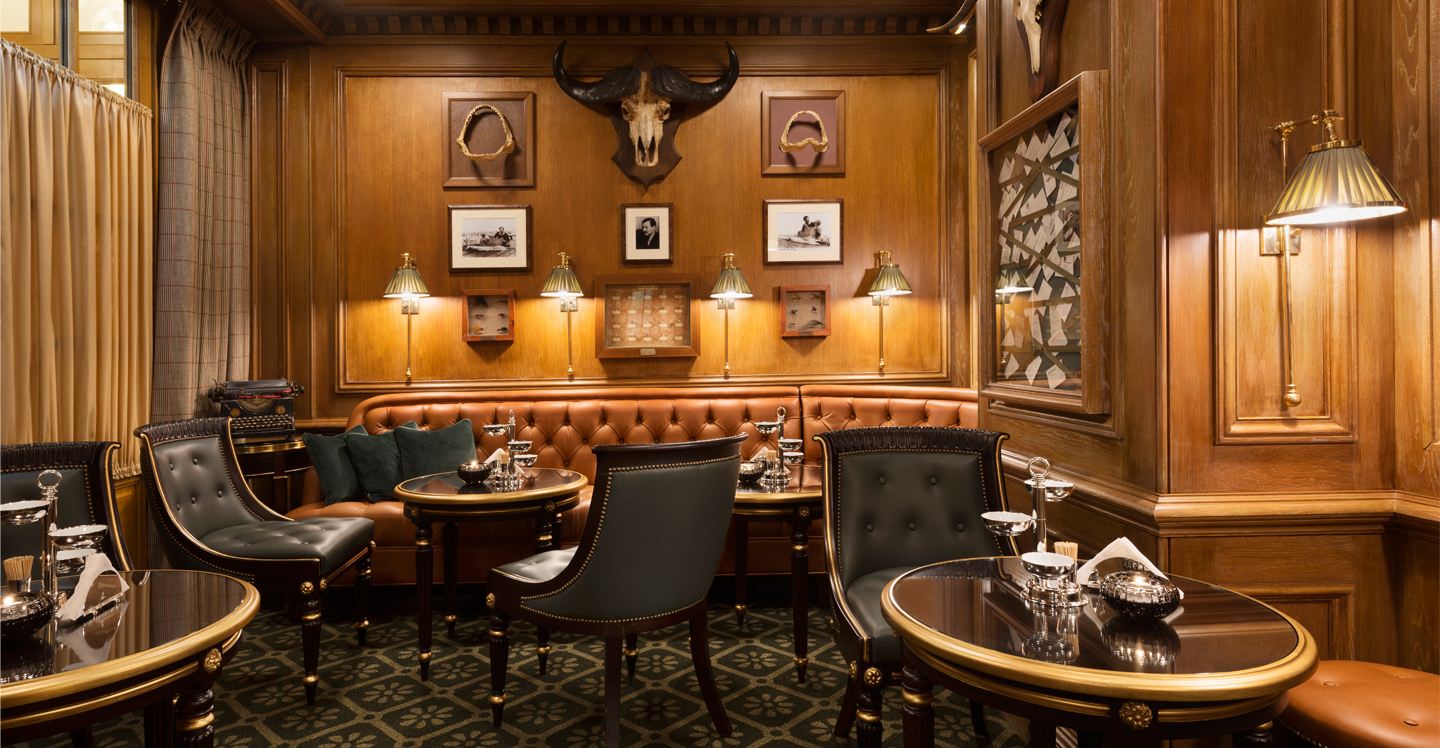 The bar is full of history with secrets and tales which will leave one hooked with fascination. F. Scott Fitzgerald (who devised the Orchid ploy to win a girl’s heart at the bar), Teddy Roosevelt, Noel Coward, Douglas Fairbanks, Winston Churchill, F.W. Woolworth, J. Pierpont Morgan and Andrew Carnegie, Calouste Gulbenkian, Marcel Proust, and the Duke & Duchess of Windsor were all regulars of the bar back in the day.

It is the alleged birthplace of the Blood Mary. Ernest Hemingway, the esteemed writer, complained to the bartender that his wife Mary hated his drinking habits and the smell of alcohol on his breath gave away his pastime. The bartender made the first Bloody Mary to which Hemingway was eloquently congratulated the bartender the next day – “well done, Bloody Mary never smelled a thing”… and a new drink was born.

It has one of the most expensive cocktails in the world on its menu. The Ritz Sidecar will set you back €1,500 – it appears to be nothing special but it contains the original 19th century pre-phylloxera cognac. In the 1800s an infestation of phylloxera (a tiny insect with a lovely taste for grapes) destroyed much of the French grape crop. The only grapes resistant to the phylloxera were the American grapes vines which were planted in France to replace the lost crops. So the wine you drink today is American grapes planted in France. Alas the Ritz has some 1830s cognac which were from the original French grapes and these are used in the cocktail (until they run out).

I visit the bar twice on my visit to Paris. I have a seat at the bar on the first night I arrive in Paris. It’s not just the history, but the service and style. The staff wear beautiful white suits and the service works like clockwork. It is a delightful experience. Colin is able to hold a conversation with such ease and is able to connect with almost anyone I am certain if he ran for the Presidency of France he would win. We chat for a while and discuss what it’s like to back in business after a long hiatus. On the second night I arrive at the bar and wish to sit at a table instead. Roman, a charming host who works the room with subtle suaveness, notes my request and finds a spot for me. Complimentary olives, nuts and crisps are served with each drink for touch.

Here are a few of the drinks I have over my two visits: 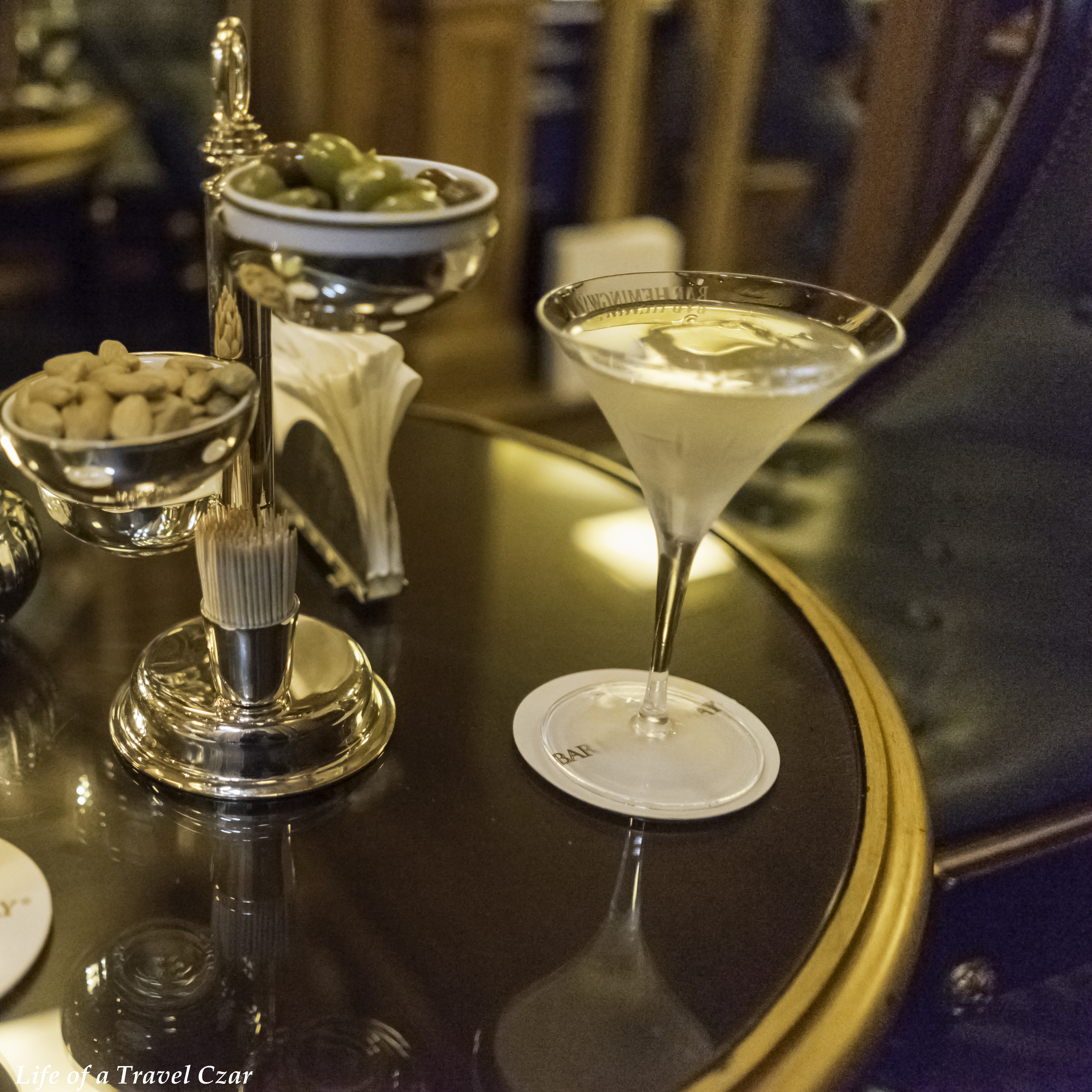 This ain’t like any dirty martini as its name suggests. The yew feeling of the visuals of a dirty martini is often balanced with the enjoyment of the tang of olives in the drink. It is a trade-off. Colin has removed the need for the trade-off with a secret method of having the lovely savoury Mediterranean flourish of the green and black olives and a crystal clear drink at the same time. He notes to me that the recipe will remain top secret. I do understand, alas I will not be able to replicate it at home. 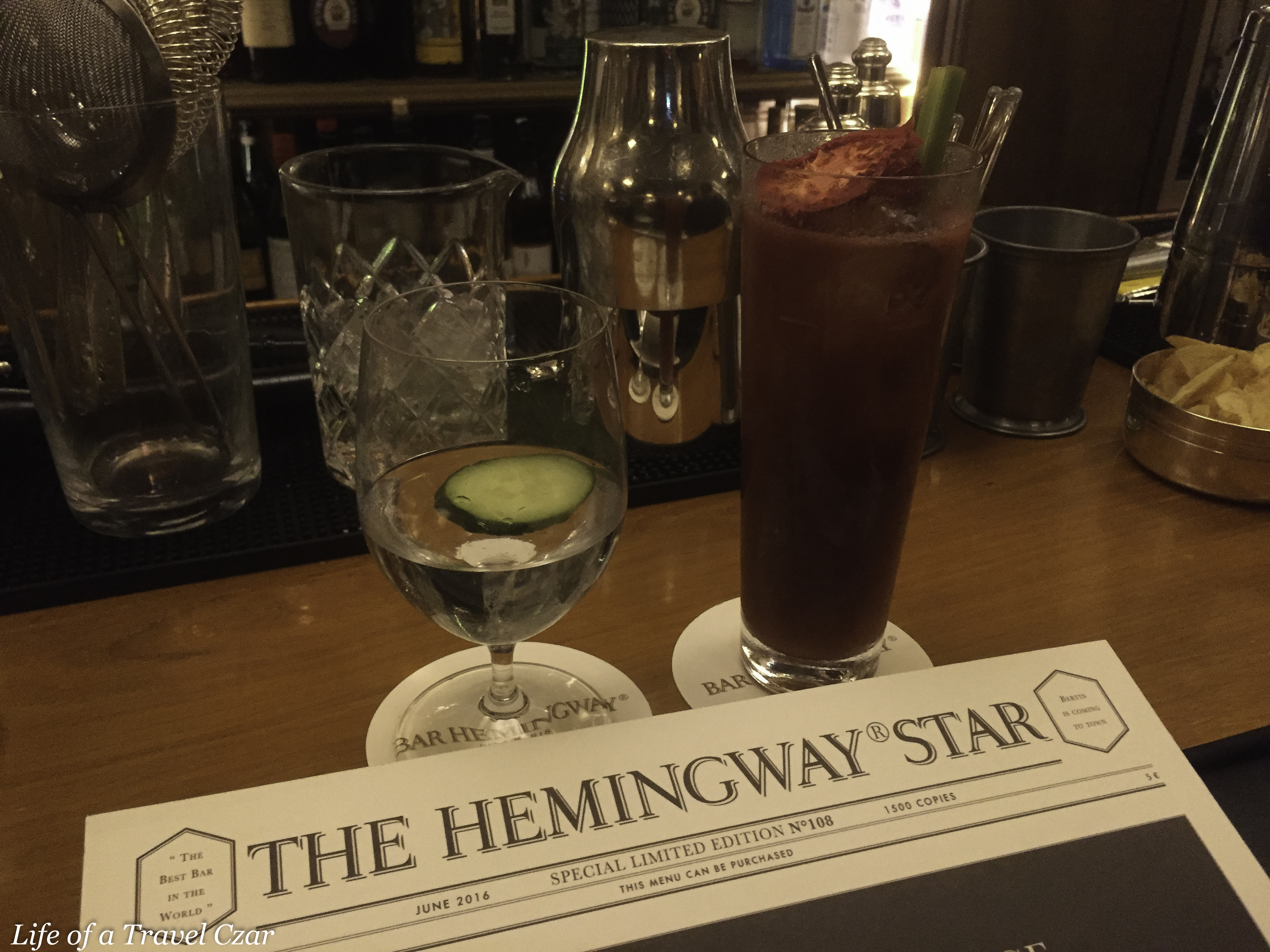 Now everyone knows a Bloody Mary, but this one is a little spesh… and not just because it was invented here. The cocktail has delicious ripe tomatoes which are pressed and mixed with a load of Elyx vodka and a little salt. Some condiments are at your disposal should you wish to indulge the thought. Before I sip on my glass, Colin chimes in to note that this is one of the few bars which press the tomatoes for the cocktail. It is a time consuming task, but the commitment to quality results in one of the best textured Bloody Mary’s in the world. 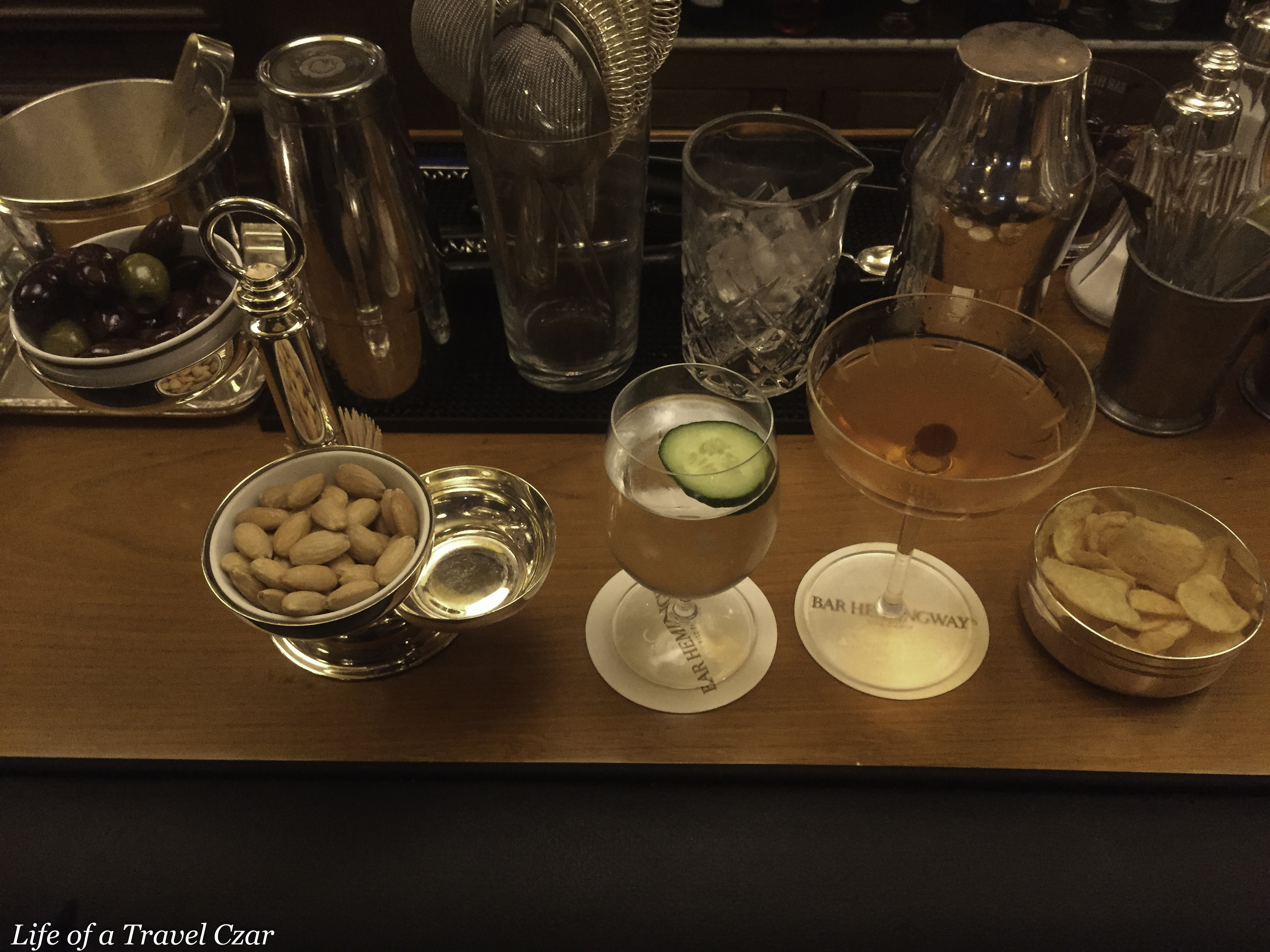 The cocktail has Grand Marnier Cuvée Ritz Paris, Absinthe, Bourbon, Aperol and Vermouth Bianco. The strength of the Grand Marnier and Bourbon means this must be sipped extra slowly, the botanicals of the vermouth bianco add a refreshing touch while the intermingled aperol parlays a bitter citrus and herby bite. The touch of Absinthe is quite something but is muted by the other ingredients. As they say “Absinthe makes the heart grow fonder” 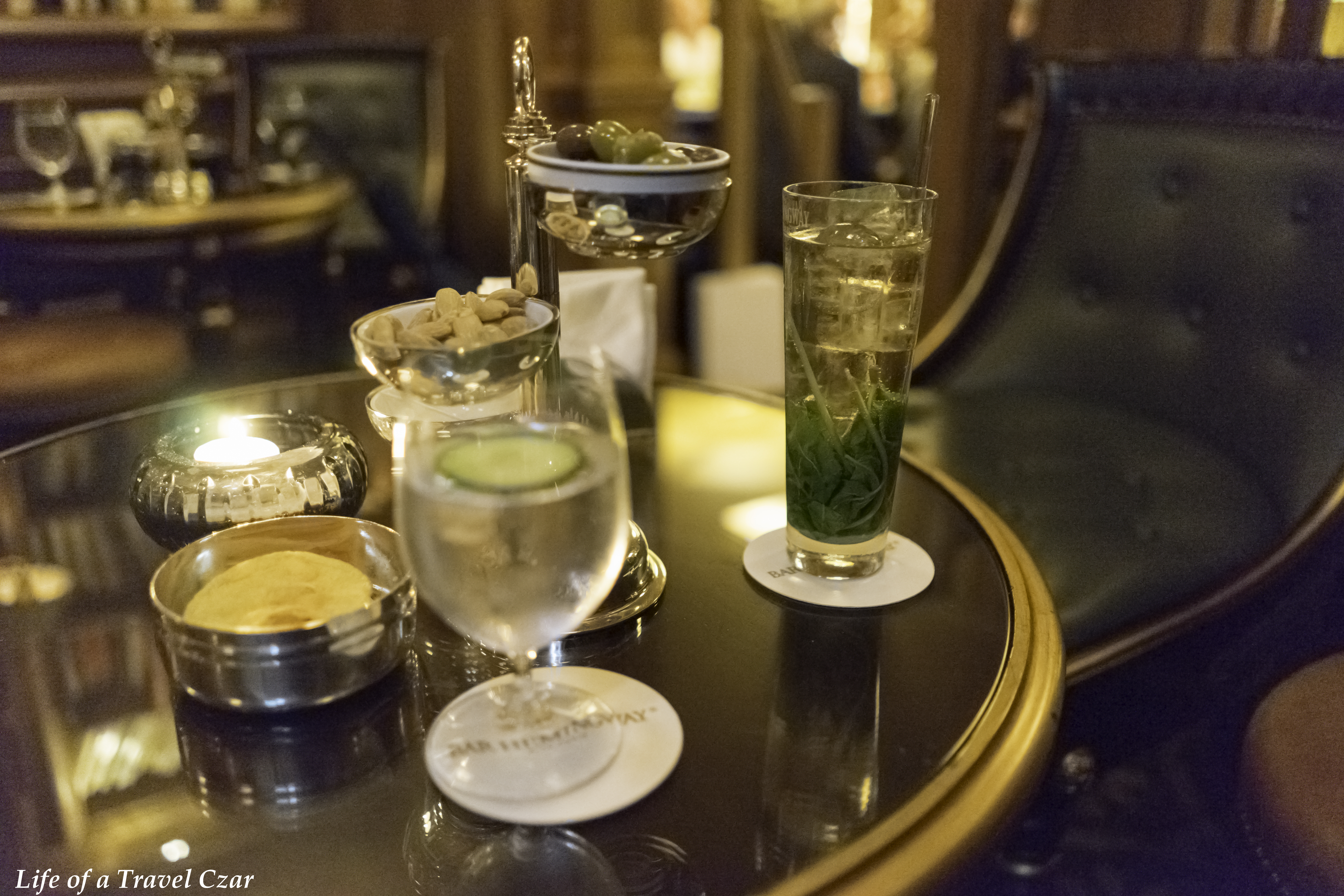 The cocktail has Calvados (Le Pays d’Auge), fresh mint, apple juice, and champagne. I order it both nights. When I order the cocktail, Colin notes politely that Pauline knows how to make these better than him and appropriately delegates the job. Pauline takes the compliment with a charming smile and beavers away and delivers – she definitely knows how make them. This would have to be my favourite cocktail – the refreshing apple, the acidity of the champagne the refreshing flourish of the mint and the richness and tartness of the Calvados. A pure delight indeed.

As I leave the bar for the final time I reflect on a quote from Mr Hemingway himself…“When I dream of afterlife in heaven, the action always takes place in the Paris Ritz. It’s a fine summer night. I knock back a couple of martinis in the bar—Rue Cambon side. Then there’s a wonderful dinner under a flowering chestnut tree in what’s called Le Petit Jardin. That’s the little garden that faces the Grill. After a few brandies, I wander up to my room and slip into one of those huge Ritz beds. They are all made of brass. There’s a bolster for my head the size of the Graf Zeppelin and four square pillows filled with real goose feathers—two for me and two for my quite heavenly companion.”

To be honest it’s kinda the same dream I have… 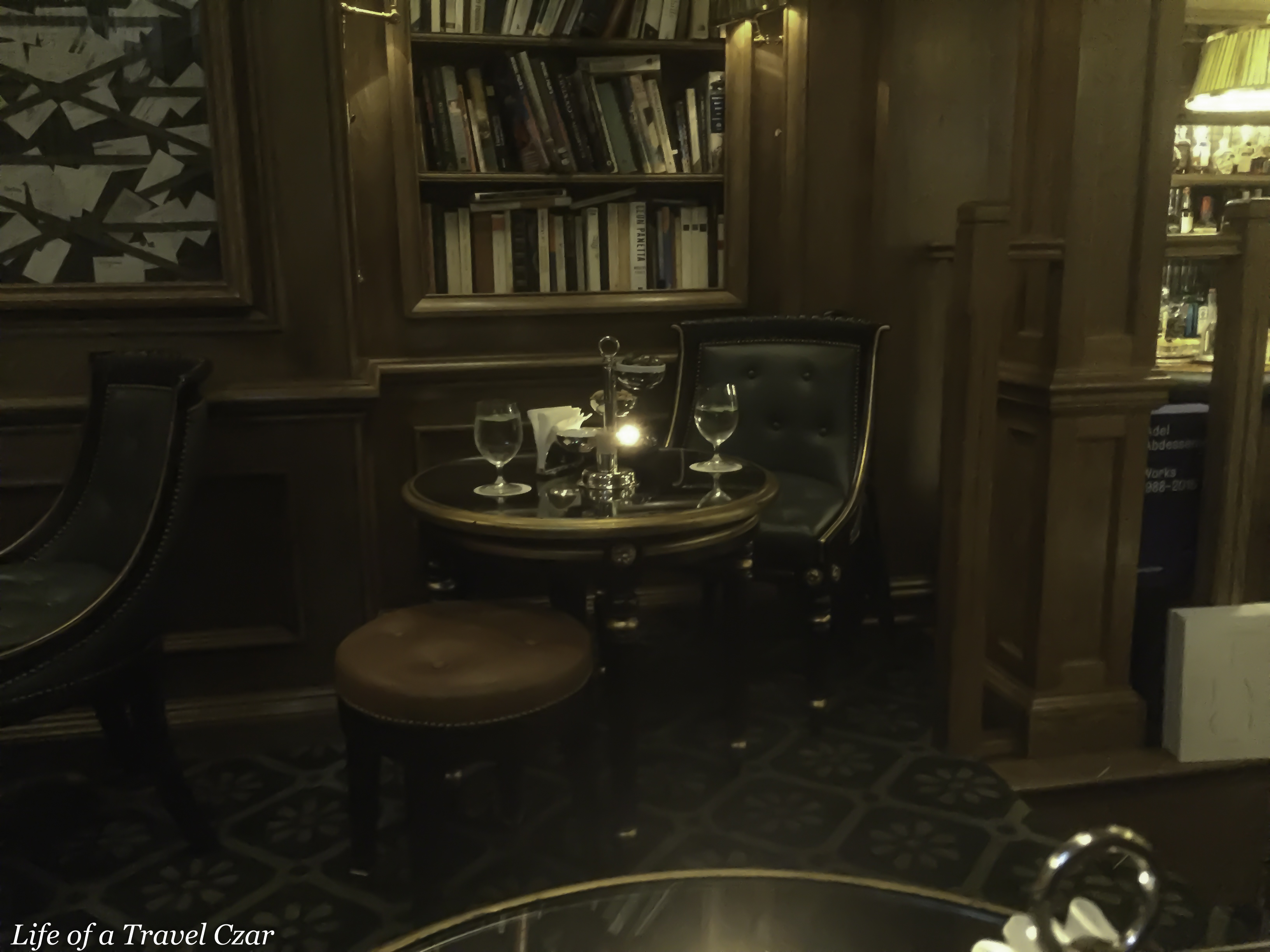