I was invited to a foodies event by Zomato (a food community and online platform full of dining options in major cities around the world). The location of the dinner was Voulez Vous, a Serbian / Mediterranean Restaurant located in the inner city suburb of Surry Hills in Sydney.

We arrive and the tables are beautifully decked out to start the evening. 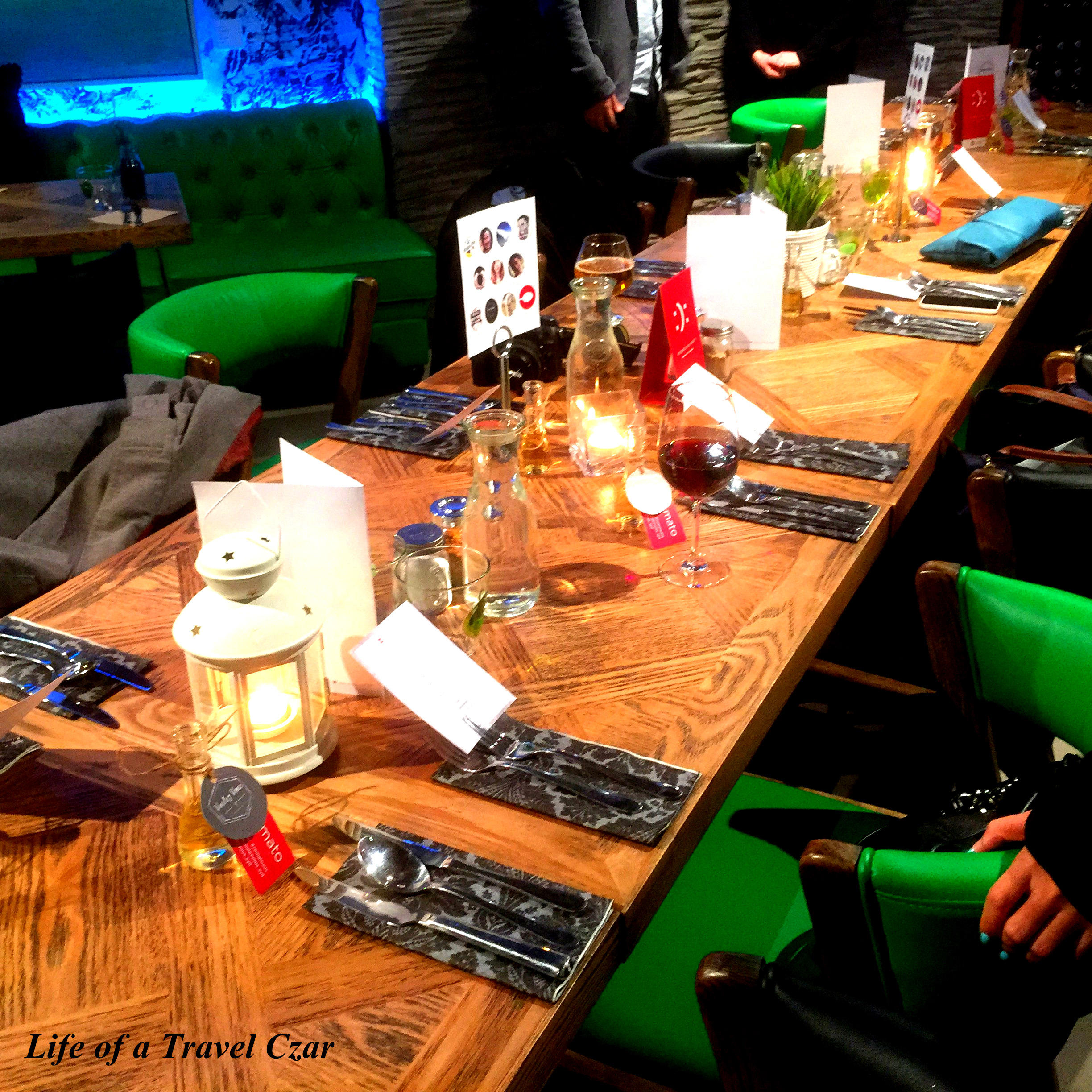 There are a variety of foodies in attendance… so camera flashes throughout the dinner are a given! I just loved mingling with the Zomato team and my fellow foodies. 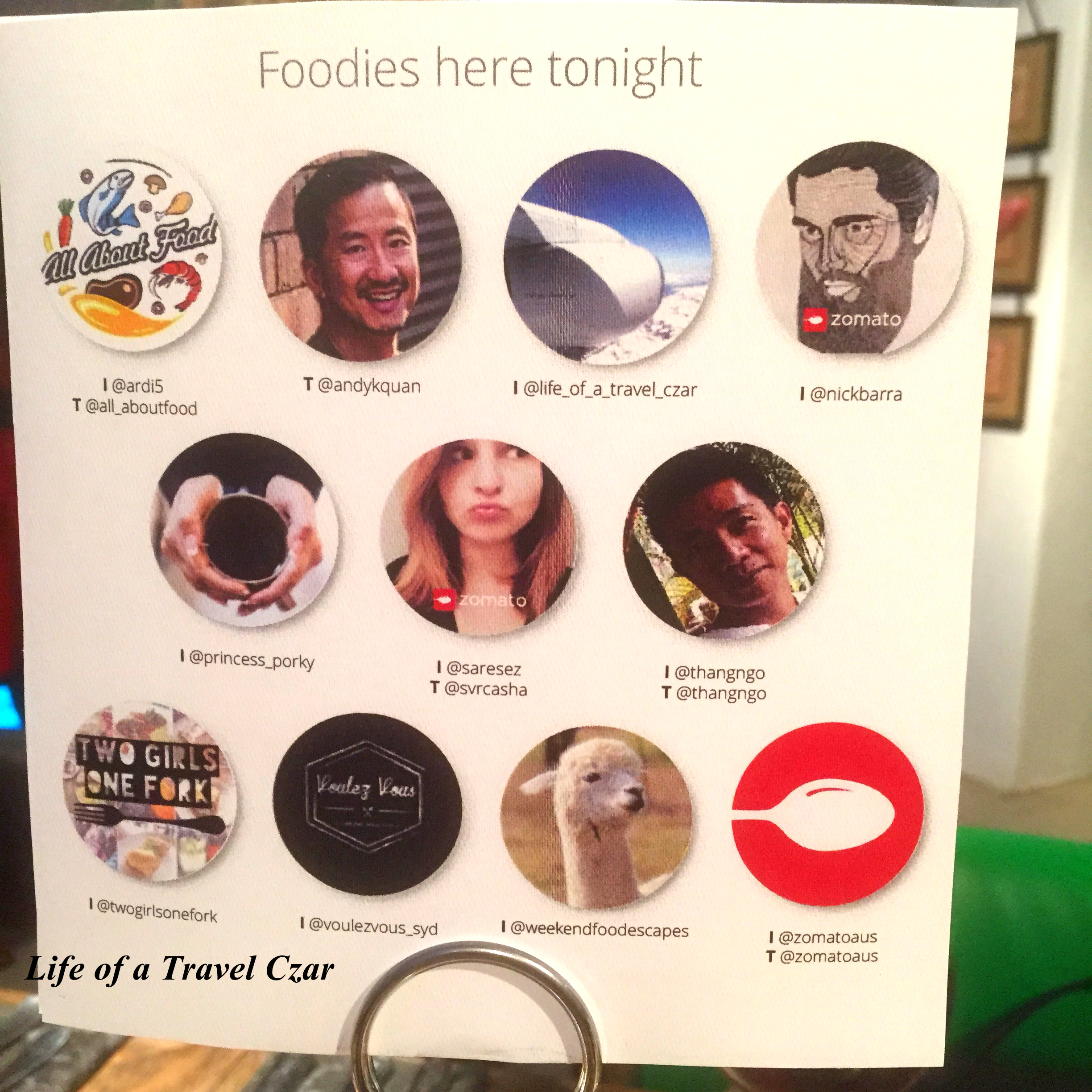 We start with some pre-dinner drinks to get things going… 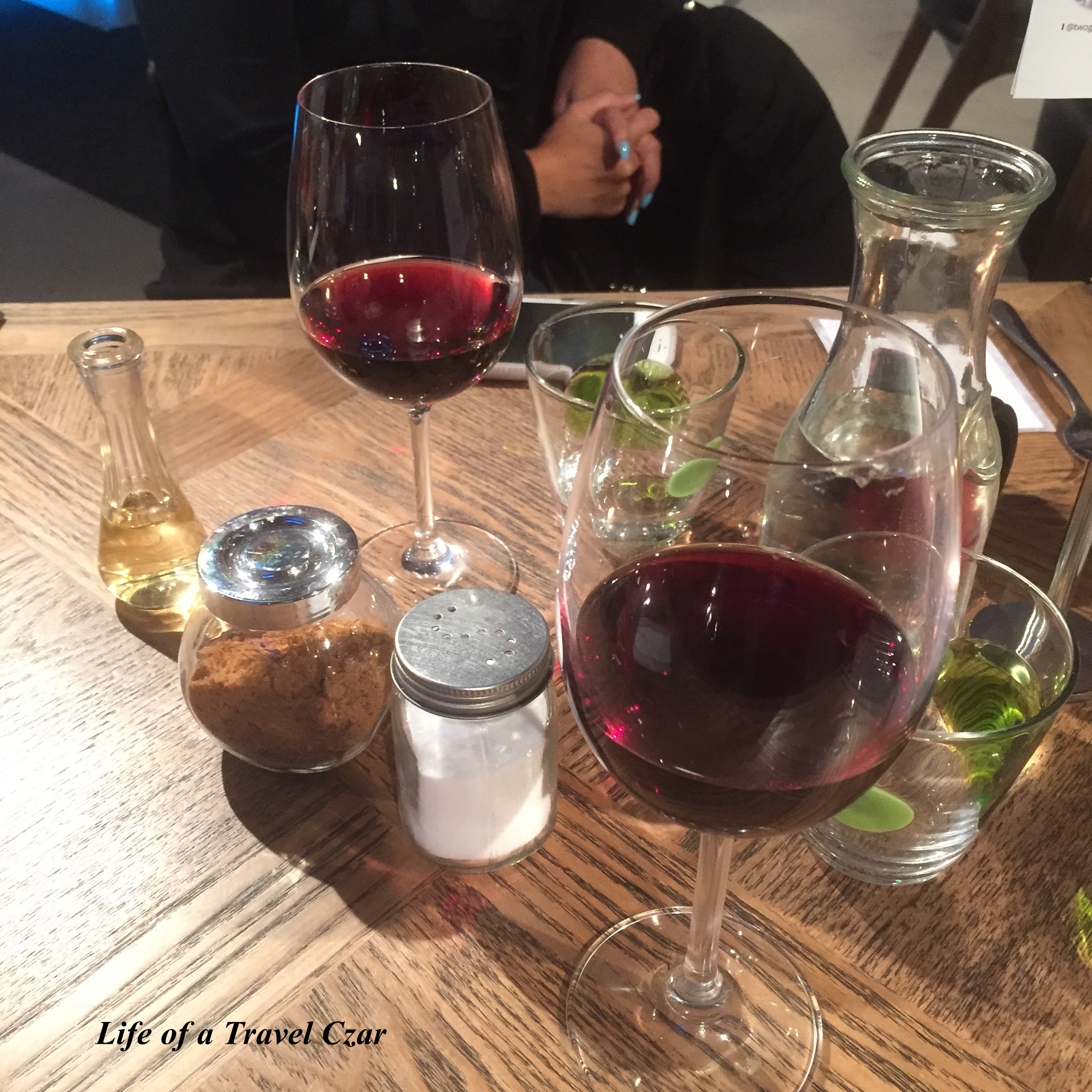 We each have a special Quince Liqueur (Serbian Rakija) placed on the table to sip throughout the night. It is strong with an intense hit of fruit flavour and the grip of the alcohol with some mild nutty hints in the finish. It proves the perfect sip-a-long drink (please don’t ever try to use it as a shot). 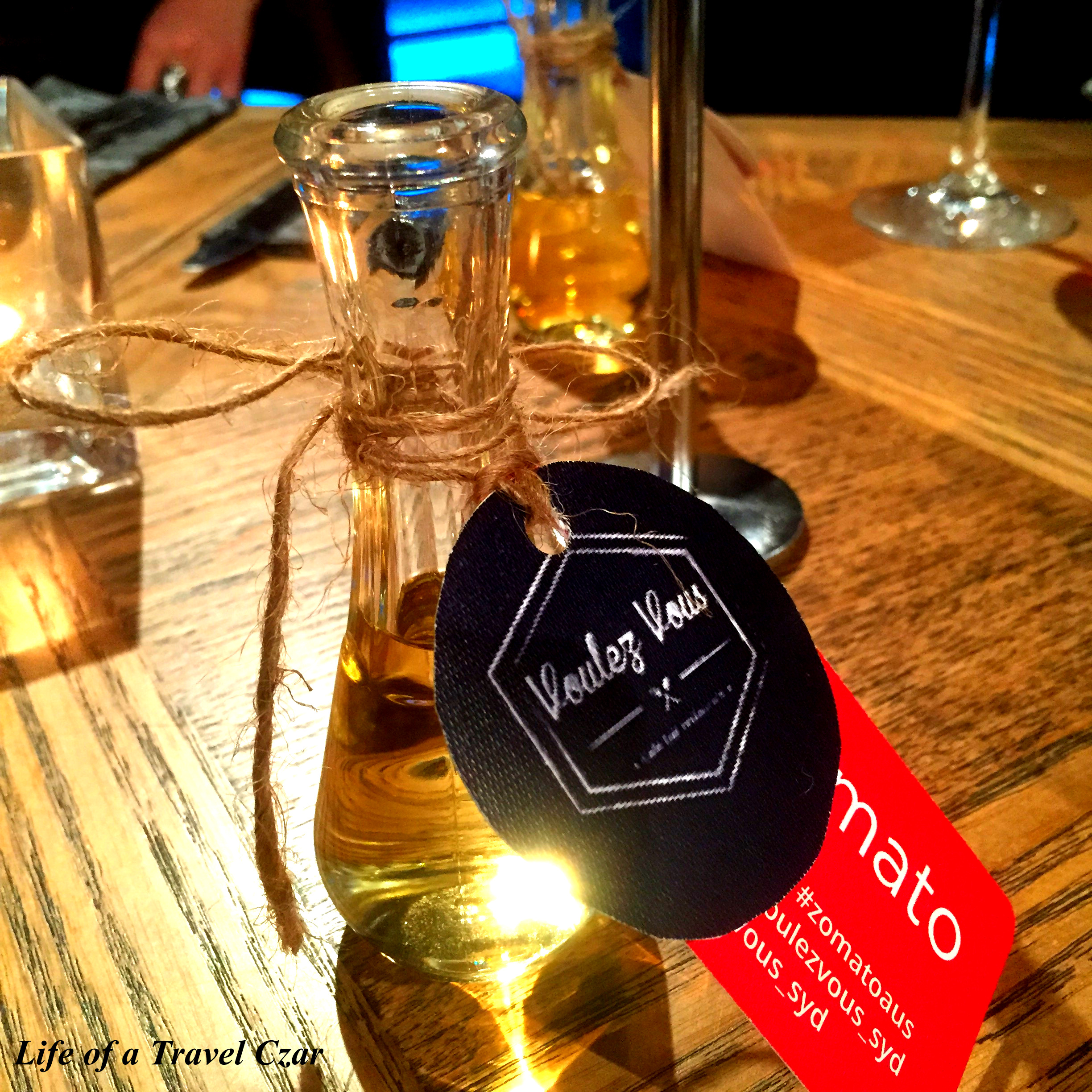 The menu was served alternative drop style. Each diner had either a fish or meat entrée tasting platter and then a fish or meat dish for the main course and there were two different desserts served. 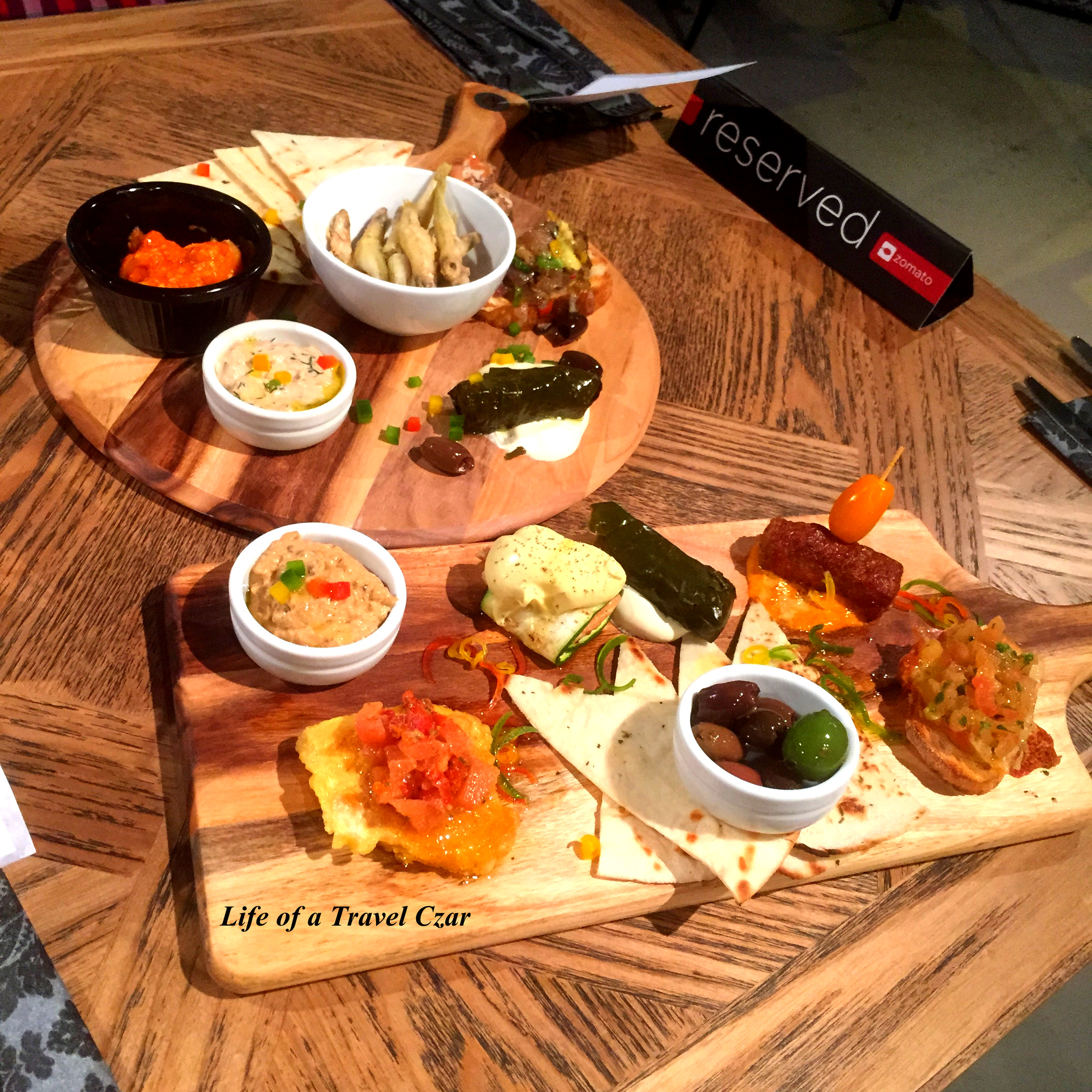 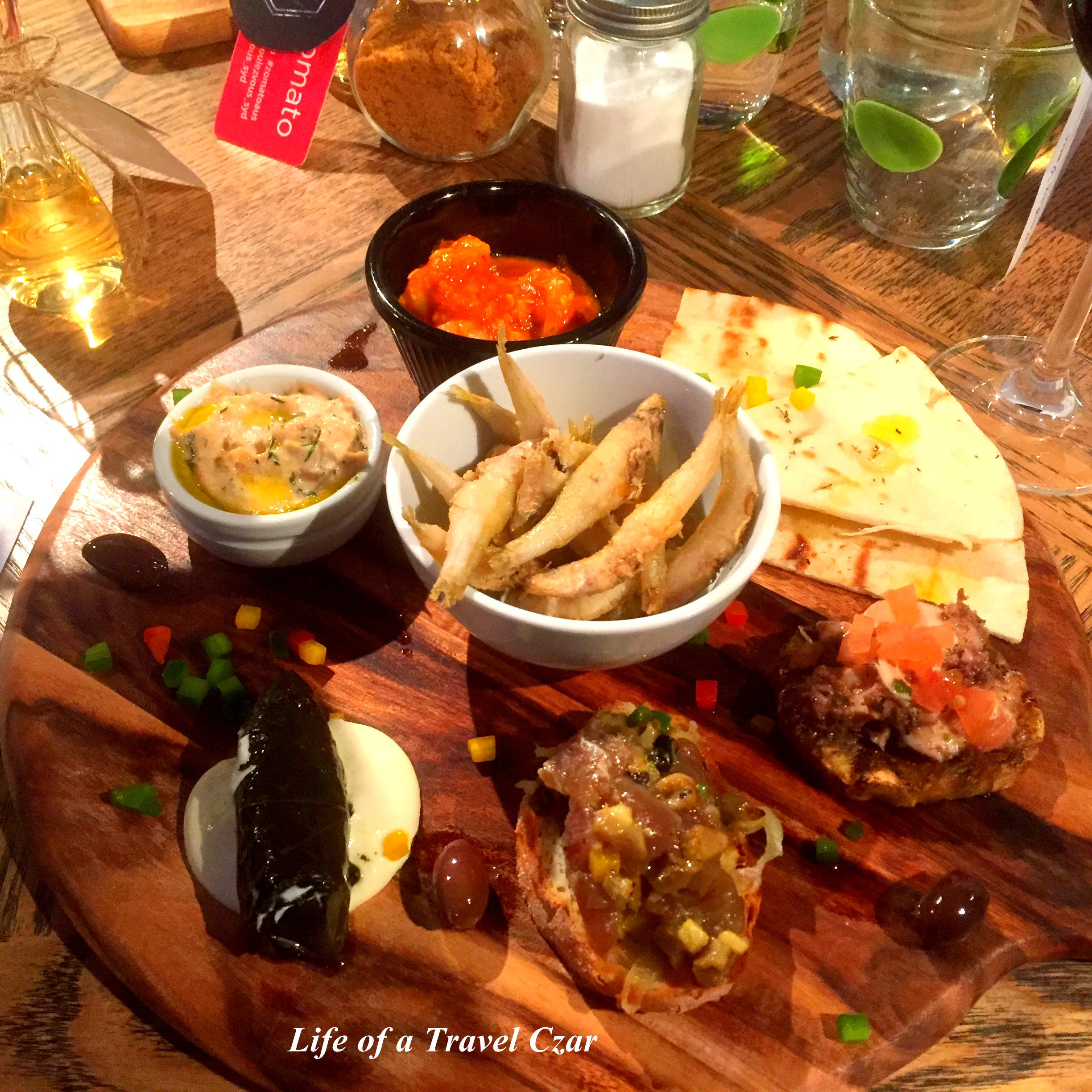 The octopus was fresh and showcased its natural flavours effortlessly with the zesty marinade adding some tangy overlay on the crunchy bruschetta. The tuna dip has a creamy consistency while maintaining some of its natural texture (the flaky hints which one would expect) and spreads nicely on the pita. The bruschetta-tuna with grilled vegetables was straight out of a Mediterranean text-book, while the prawns were interesting with the juiciness of the tomato based sauce being intermingled with bits of what seemed like melted cheese.

The Gilice was where the entrée shone… normally fried whitebait either has too much batter or the batter is too thin and the oil has absorbed excessively into the fish. In this case there was an optimal balance between the crispness of the batter and fish not being excessively fried.

The other entrée platter looks lovely too… causing the usual food envy…. 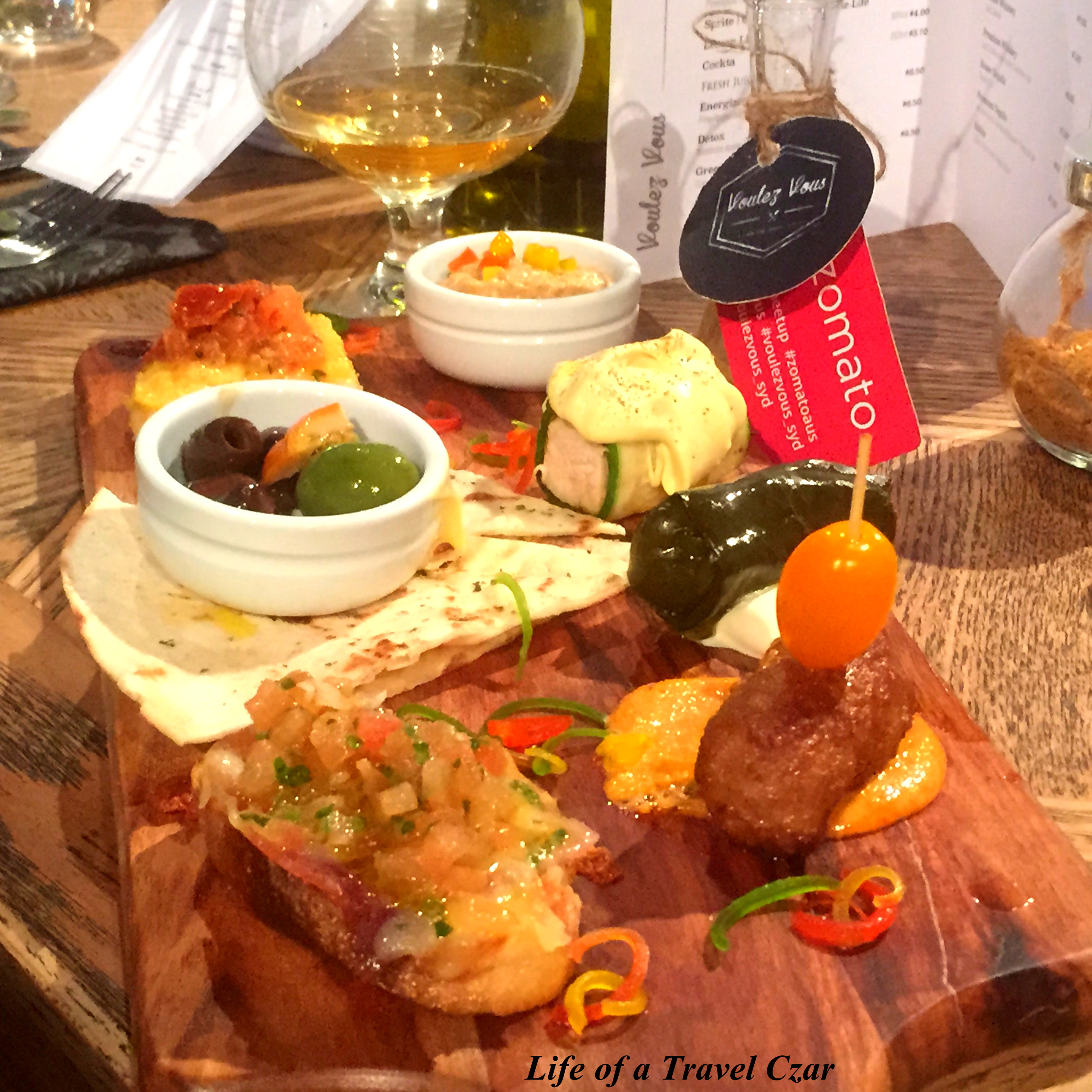 The Saach is a Serbian dish which is suited to the freezing Sydney weather we have had of late. Its a mix of veal, lamb and vegetables cooked in a butter sauce. The owner explains to us that it requires some skill and technique lest the meat ends up burnt.

On first taste of the dish, the sweetness of the lamb’s juices is critical as it imbues the dish with its natural flavours through the cooking process. The veal is much milder and has very fine texture but the juices from the lamb and butter allow it to be well cooked without becoming too dry. The lamb provides some contrast with its beautiful falls apart texture and its striking flavour. The vegetables have that comfort factor of being roasted in the butter. It is truly a winter comfort dish.

The other main course is the tuna steak… 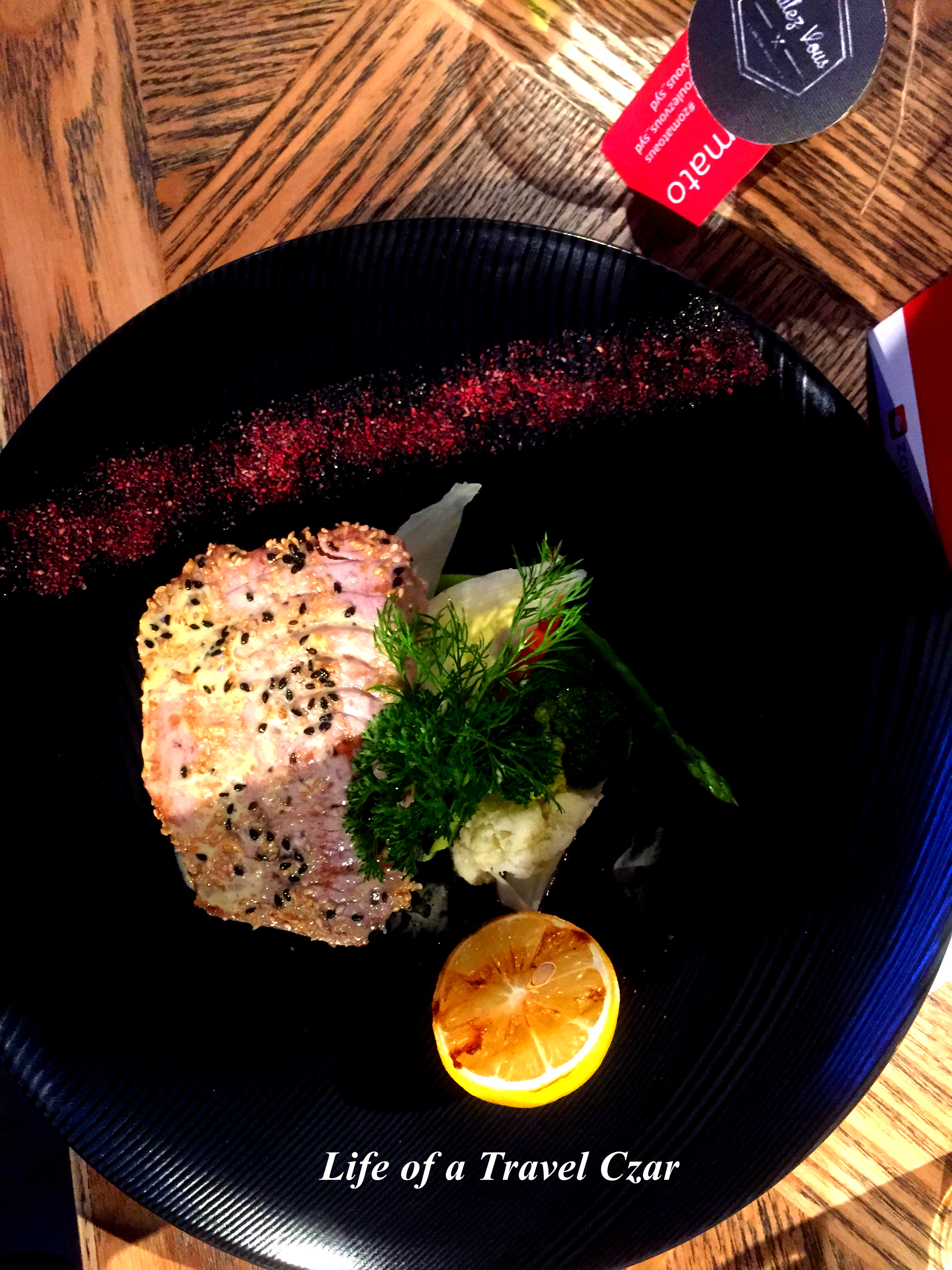 The desserts were quite interesting… without going into too much detail, I would say that the feedback was very positive on the Pear Dessert and I did have a taste and enjoyed it, however I did enjoy the Nutella Torte which was served to me. 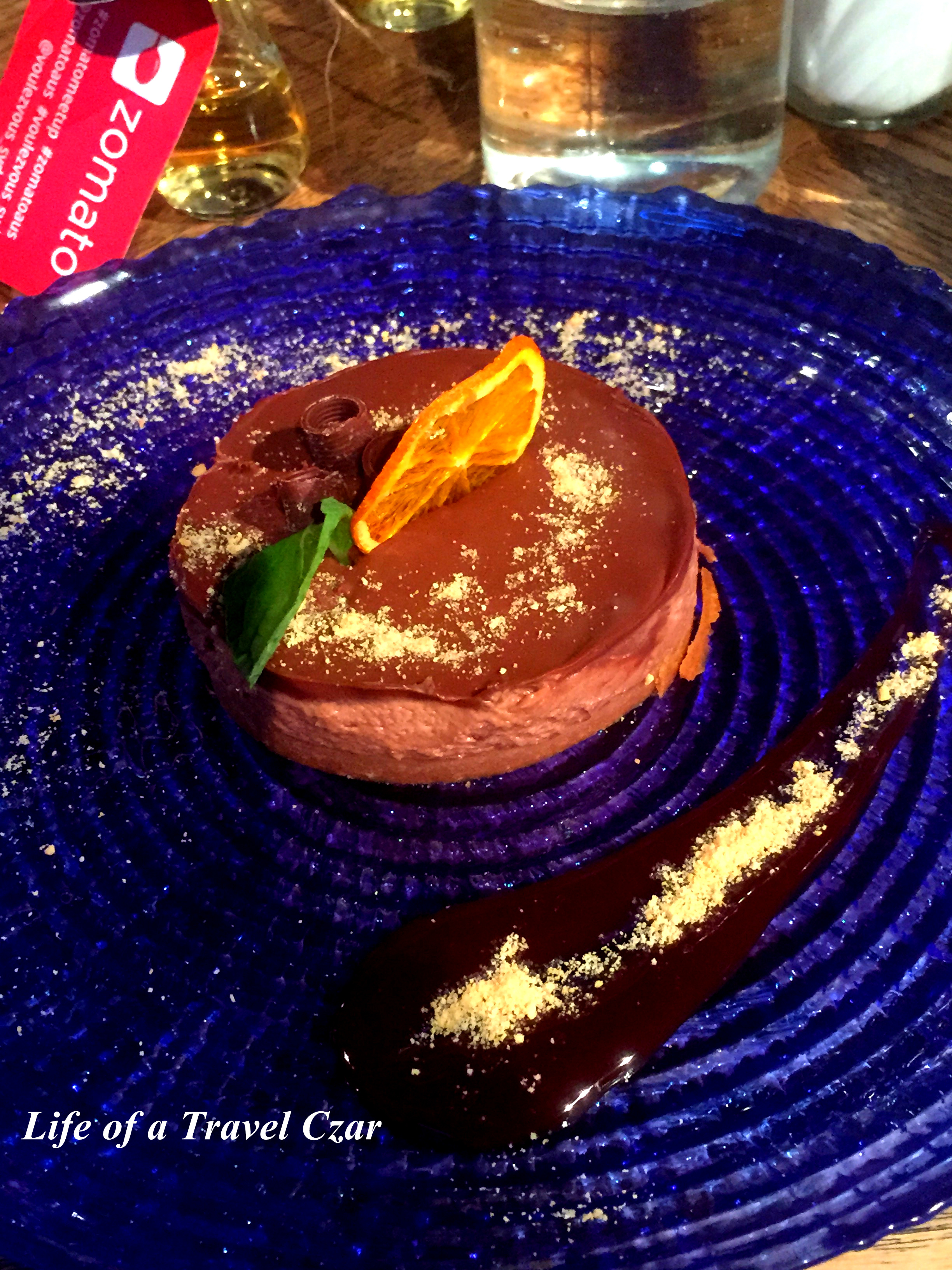 The rich chocolate flavour and nutty thickness of the top of the dessert is a decadent and sensuous experience! This is then balanced by a milder filling portion which is quite creamy but where the dish proves disruptive is in the base. I was expecting on of those crumbly biscuit bases, but instead a soft, sticky chewy, caramel-like cookie dough style base presents itself with a unique texture to complement the rest of the dessert.

Here is the photo of the much-loved pear dessert 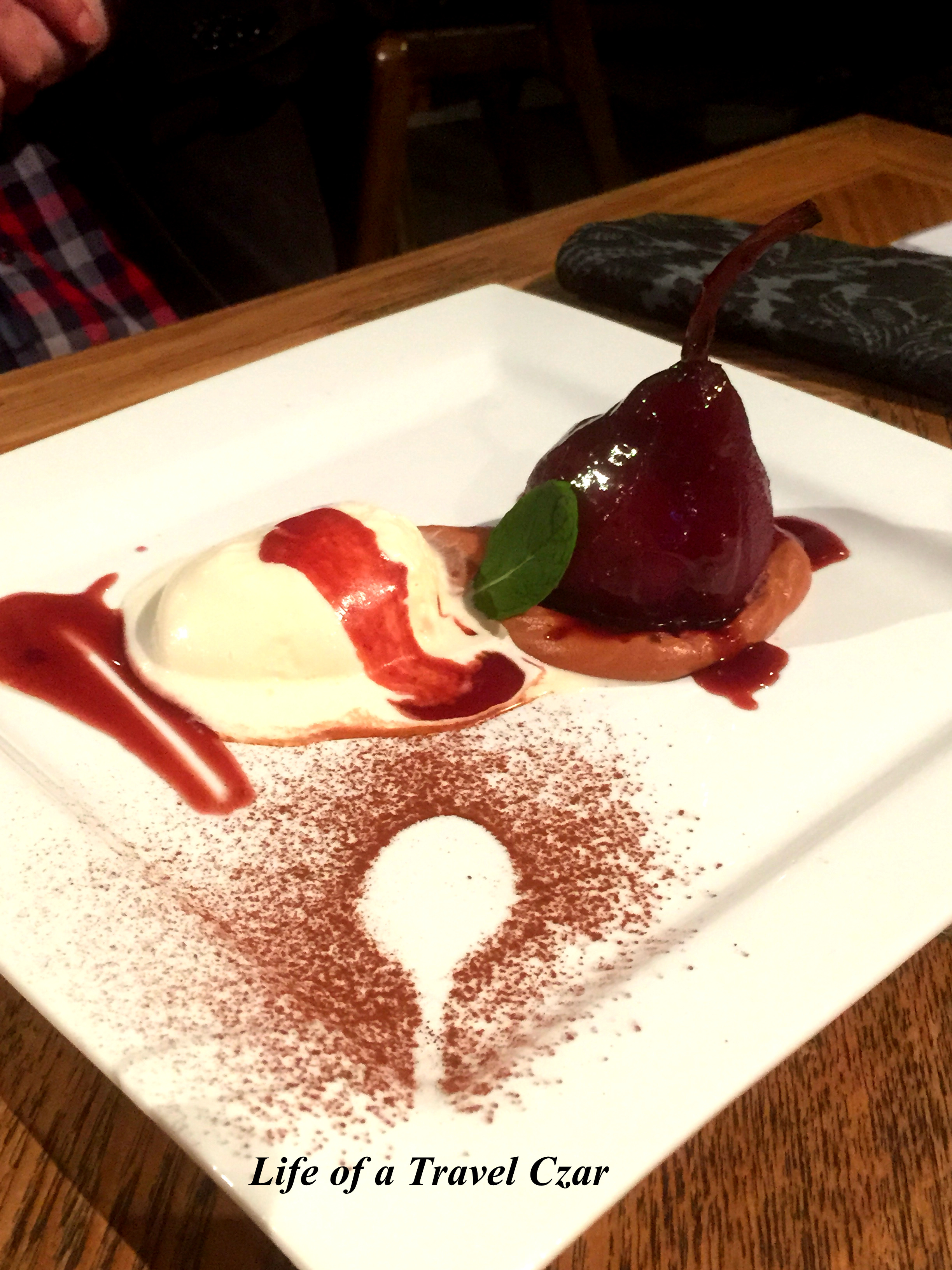 Overall, the dinner was enjoyable. There were some creative dishes and indeed some simple items which were well executed (especially the Gilice and the Saach). The desserts at this place (especially for someone like myself who is not a dessert person) were simply amazing. When every restaurant appears to be favouring American/Mexican/casual dining cuisine its nice to see something a little different to add some colour to the dining scene. 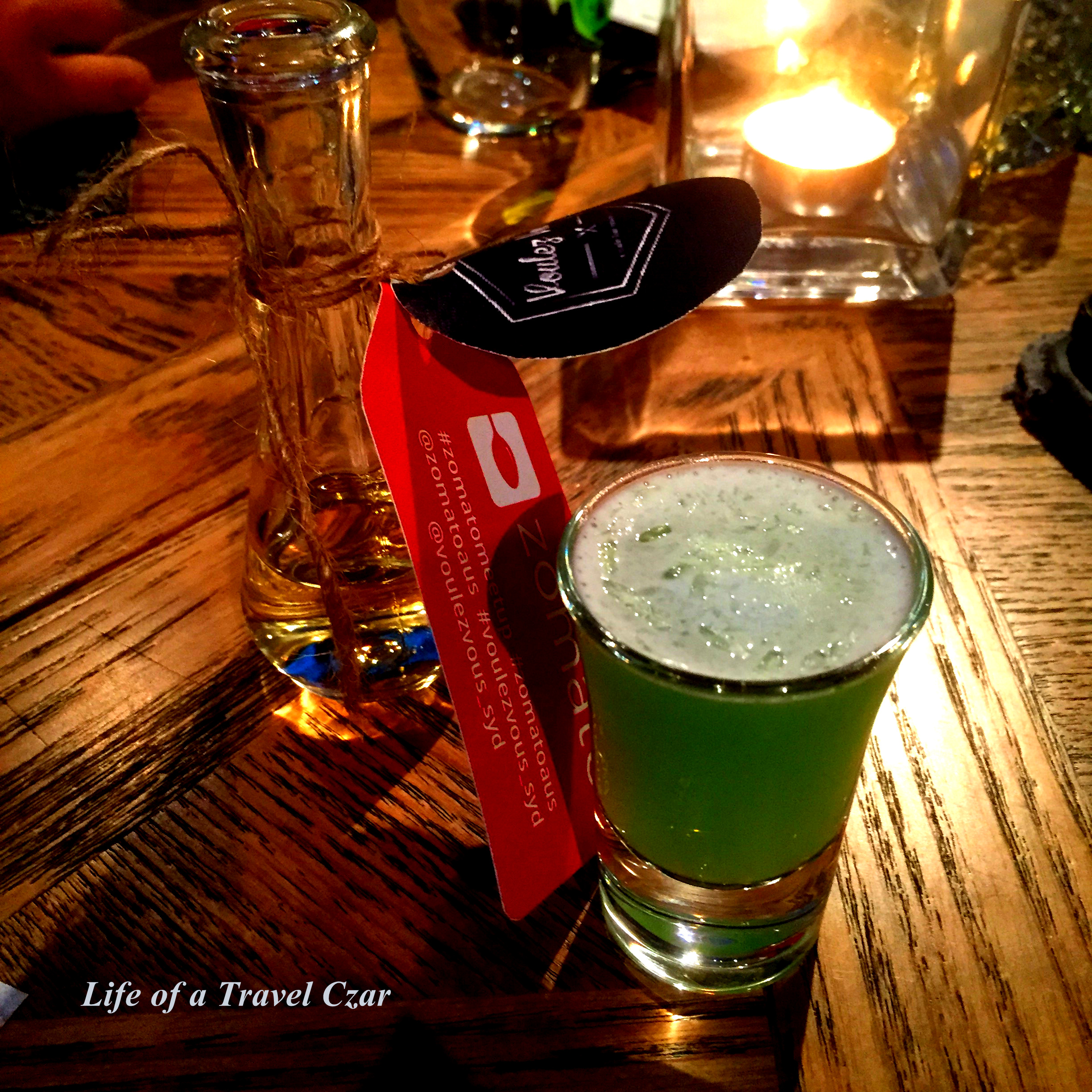 Note: Life of a Travel Czar dined as a guest of Voulez Vous and Zomato, but as usual his opinions are his own.