The Neuschwanstein Castle is a grand castle located on the hills of the village of Hohenschwangau in southwest Bavaria. The castle was conceived by King Ludwig II of Bavaria in 1868 and completed in 1884. The workers laboured day and night over the course of that period in tough conditions to deliver the King’s demands. Notwithstanding it’s magnificent size, it was only ever meant for Ludwig to live there by himself.  The castle has since captured the attention of the world. It was the inspiration for Walt Disney’s Magic Kingdom and Sleeping Beauty’s castle in Disneyland – it’s the very definition of a fairy tale castle.

The most telling insight into Ludwig’s dream for the castle’s is contained in his letter to Richard Wagner (the famous composer): “It is my intention to rebuild the old castle ruin of Hohenschwangau near the Pöllat Gorge in the authentic style of the old German knights’ castles, and I must confess to you that I am looking forward very much to living there one day (in 3 years); there will be several cosy, habitable guest rooms with a splendid view of the noble Säuling, the mountains of Tyrol and far across the plain”

This castle was not meant to be anything short of magnificent in all its splendour.

I fell in love with this castle from the moment I first saw it in a postcard snap. So I ventured all the way to Munich just to visit it and grab panoramic snap from the bridge opposite the castle. I wanted to catch the castle at the best possible time, on first snow and just as the sun rose across mountains in the morning.

In order to achieve this I had to wake up at 4am from my hotel in Munich, braving the freezing cold and snowfall to hop on a train to the town of Füssen (near the Austrian border) in a remote part of Bavaria. I couldn’t feel my fingers or my face in the chill of winter as I then ventured onto a bus in Füssen which took me to the village of Hohenschwangau.

I then hiked up through the path uphill in the freezing cold to catch a glimpse of the Neuchwanstein Castle. 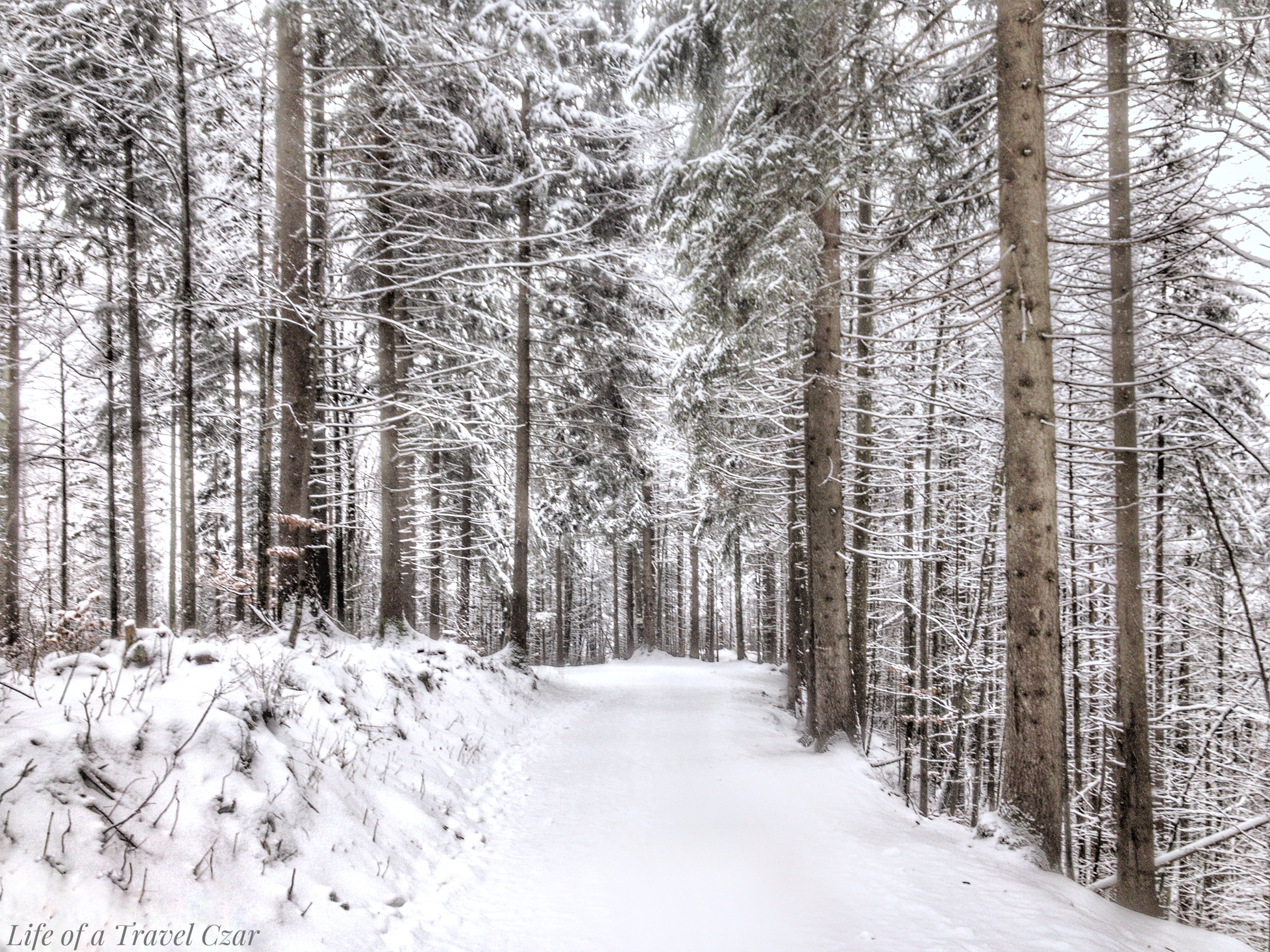 The path was filled with fresh powder from snowfall overnight, the beautiful snow covered trees and frozen streams. The walk up the hill was indeed a pure picturesque delight in its own right! 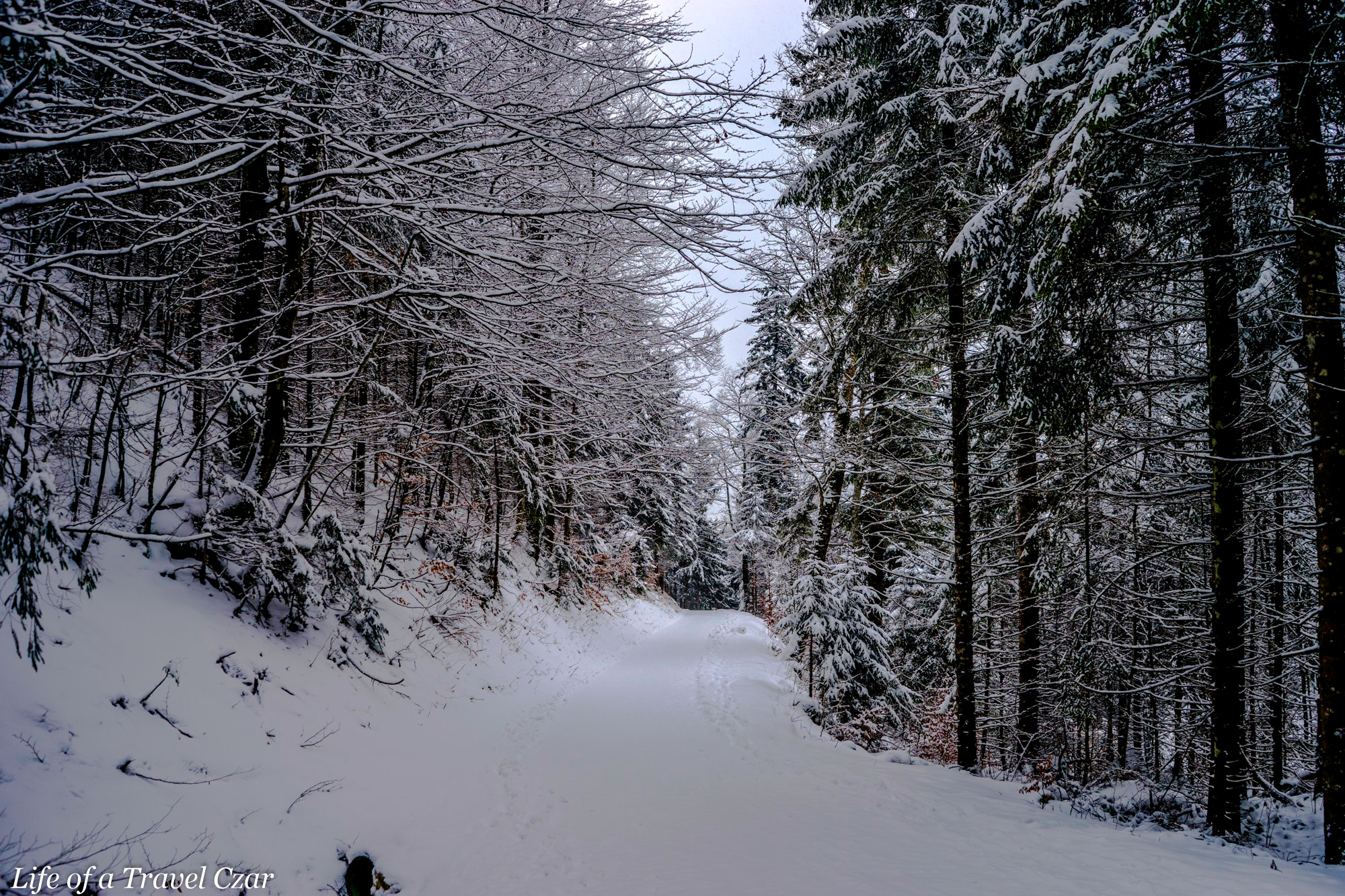 After hiking up the steep mountain and feeling completely frozen, I eagerly find myself at the Marienbrücke (Queen Mary’s Bridge). This is the main bridge which is directly opposite the castle and offers panoramic views of the castle which you see on most postcards.

However I arrive to find that the Marienbrücke is closed. I can’t get on there, as a large divider with a lock has secured the entrance. I was completely heart-broken, I would have cried a river had my tear ducts not been completely frozen. It was so not fair, I had come all this way for nothing. But rules are rules, the bridge was closed.

One of the things life has taught me is where there’s a will there’s a way. I just had to see the castle from a good vantage point. I considered climbing over the barricade at the Marienbrücke, however it would have been certain death if I lost my grip given the suspension of the bridge over the valley. I decide that’s not a risk I’m willing to take.

I decided to venture through another forbidden path to the left of the Marienbrücke where there was an elevated cliff. The “keep out” signs were in German (so I can plead ignorance), I had to dodge the barbed wire fences, slipped and fell on the first three attempts almost injuring myself on rocky terrain. I didn’t let the brush with the barbed wire or the bruises stop me. On the fourth attempt, I manage to cling to some branches and pull myself over the rocks and onto a ledge overlooking the castle.

I would describe the view, but I think the picture says it all: 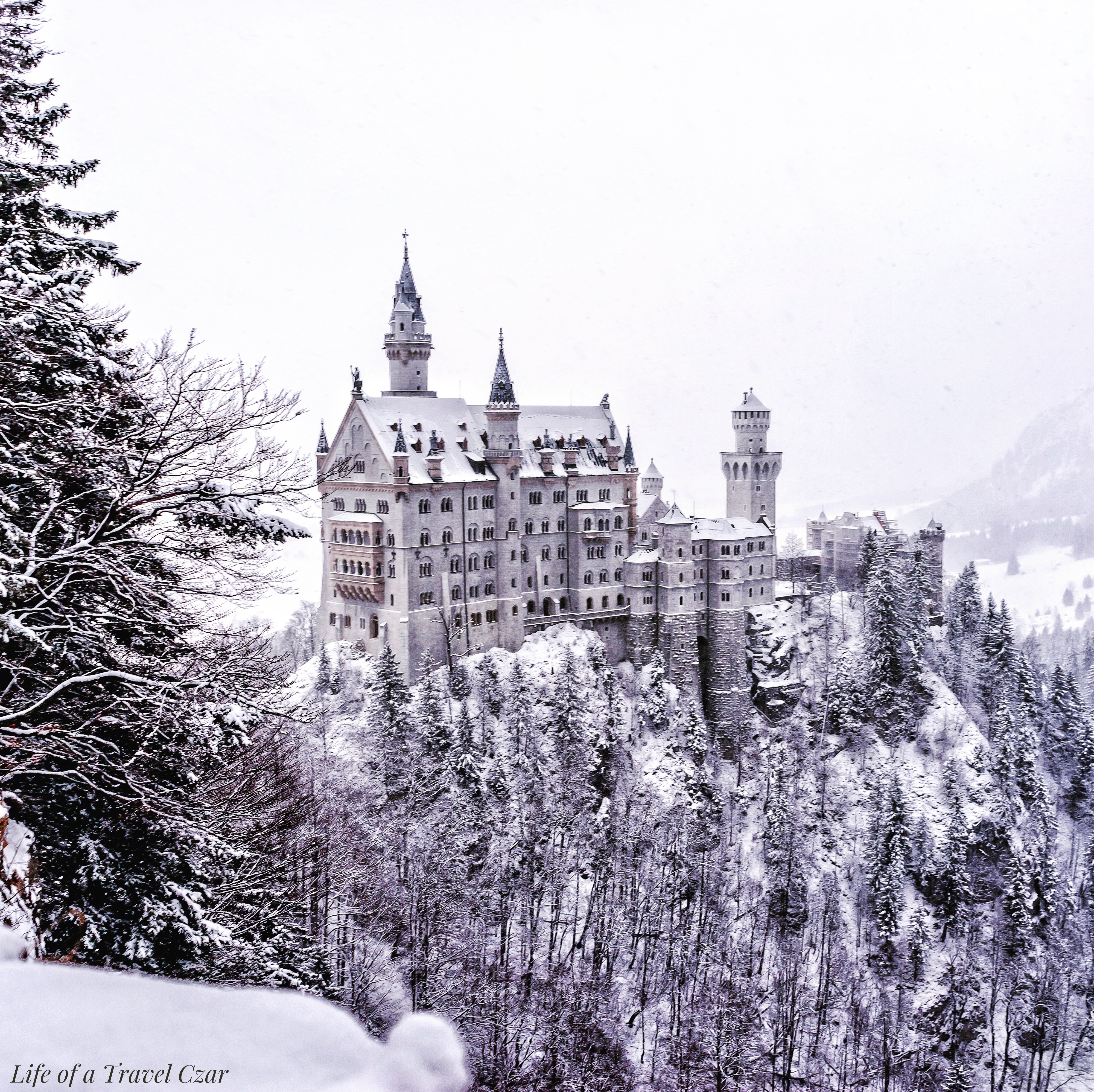 I was lost and alone in the Bavarian mountains, by myself without anyone knowing I had ventured through this path. I was truly lost but found at the same time. It was an amazing moment of awe but tinged with sadness about its history. King Ludwig II who built this amazing castle was accused of being mad and later deposed on grounds of “insanity”. There are so many of us in this world who have dreams and visions which are different to the mainstream and we are often branded as insane or eccentric.

It has a special moment for significance for my own life; I have had such labels thrown at me since I was a little child – as I am a tad eccentric. But at this moment, gazing at this castle I know I would rather live a life that is magically insane than be with the conformist club of sanity. Ludwig was not mad; he created a masterpiece that outlived all his detractors and continues to marvel all those who visit it.

It is impossible to describe the visit in just pictures, so here is my video diary of the trek and the castle. Hope you enjoy it.

Ps. On reflection I just want to caution others on attempting the same trek. The Bavarian authorities were right to seal it off that area. If something had happened (e.g. if I had slipped), given it was early in the morning, the lack of people in the area and the adverse weather conditions things could have ended pretty badly. So I don’t recommend doing what I did. If you would like to see the castle from a good vantage point, I recommend a trip in summer when the bridge is opened.